Whether Nature-Made or Commercially Produced, Gifts Sell at Caves and Caverns 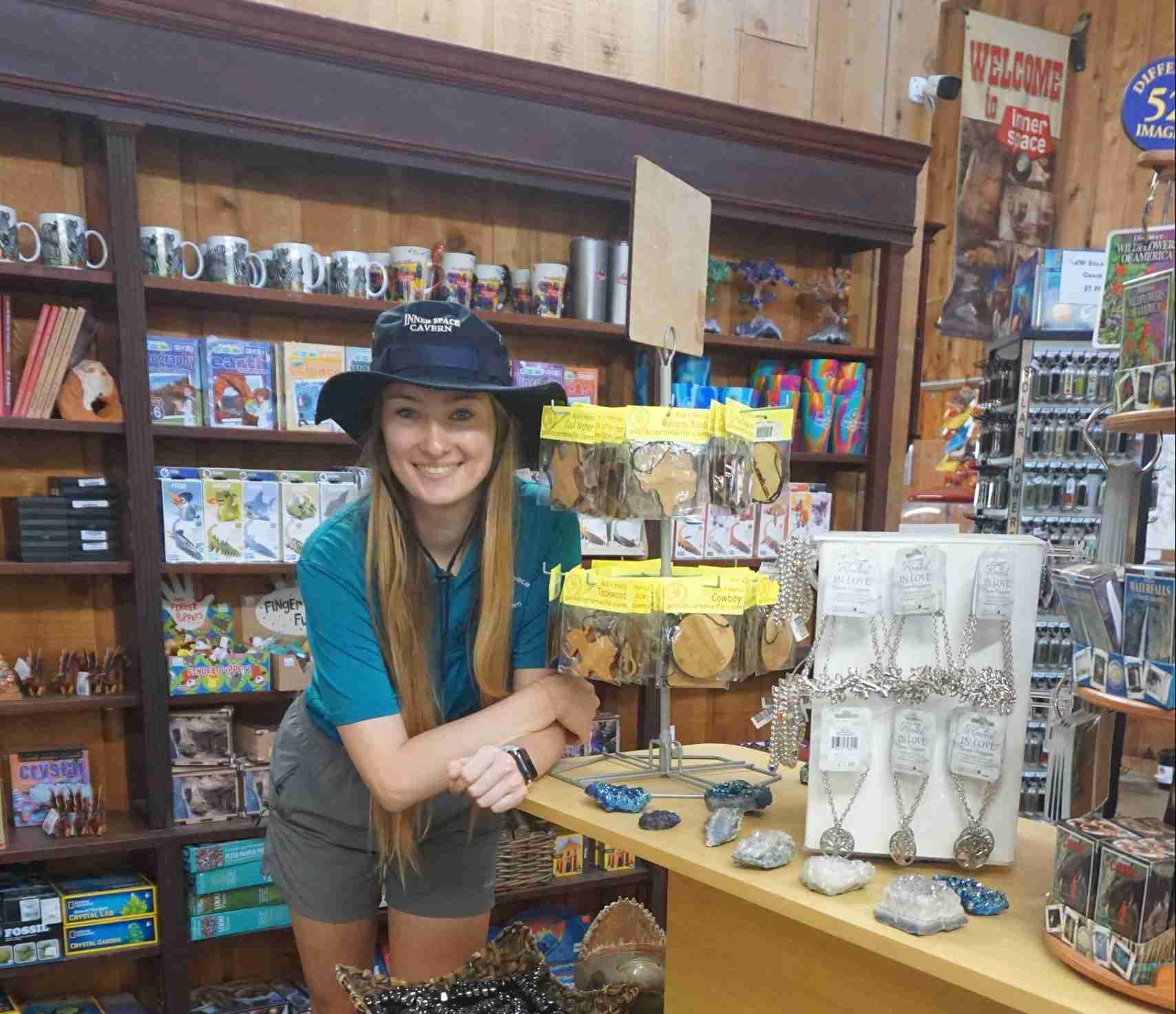 Frank Hurley, the second oldest ‘Cave Man’ in the United States, purchased Jacob’s Cave located in the Ozarks in 1965. He said the merchandise in the cave’s gift shop is reminiscent of a visitor’s experience exploring the cave. They sell numerous types of rocks and minerals, including black light rocks and polished rocks and jewelry crafted from these rocks. They specialize in geodes obtained from northeast Missouri. They saw these geodes in half to expose the mineral matter within. In addition, they extract mineral specimens from inside Jacob’s Cave and create necklaces from the material. These one-of-a kind necklaces are sold for around $25 a piece. 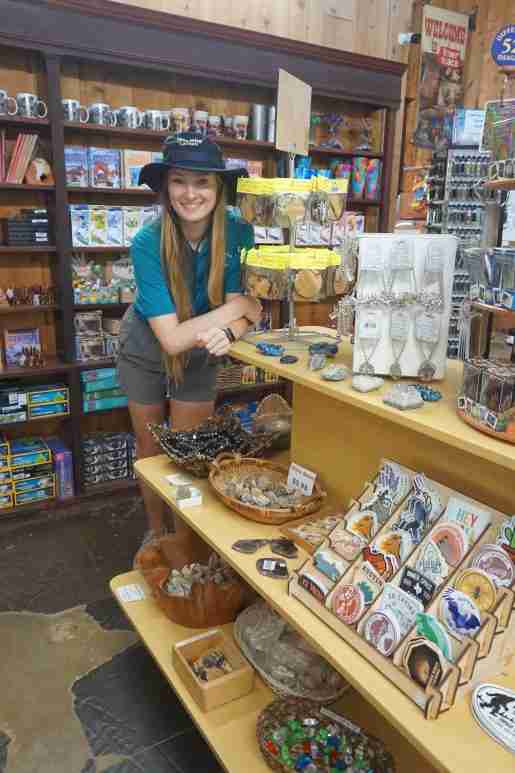 Customers are especially interested in pretty or polished rocks. Minerals that are florescent or that show when under black light are easily sold as well. Little kids are big fans of polished rocks said Hurley. They sell a half cup of polished rocks about the size of a thumbnail to kids aged 5 to 10.
According to Hurley, teenagers or older women are interested in the jewelry they sell, while older men prefer geodes that have been cut in half and polished to place on their desk. 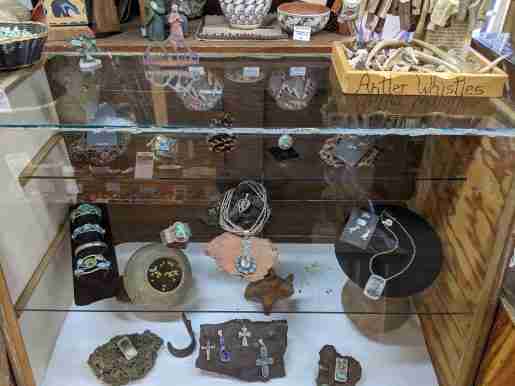 Ice Caves and Bandera Volcano gifts including antler whistles and jewelry. Keychains have been a surprise hit for the attraction.

About 10 years ago, they started selling pendulums. Pendulums are chains with a rock made from a variety of minerals attached to only one end. Lore has it that if you ask a pregnant woman to lie down and hang the chain over her belly, if the chain goes in a circle, the baby is female, but if it swings back and forth, it’s male. Ten years after they started to carry the chain, the product is still popular with guests, expressed Hurley.
With approximately half a million dollars in annual sales, Georgetown, Texas-based Inner Space Caverns relies on sales of staple custom items like coffee cups, teddy bears wearing T-shirts decorated with ‘Inner Space Cavern’ and shot glasses. But Danielle Hipp, gift shop manager and Taunya Vessels, general manager, indicated they also stay on top of the trends. For instance, they followed the fidget spinner craze by name dropping them and bringing them in when the item was hot. They also brought in – and recently sold out of – name-dropped mood rings. 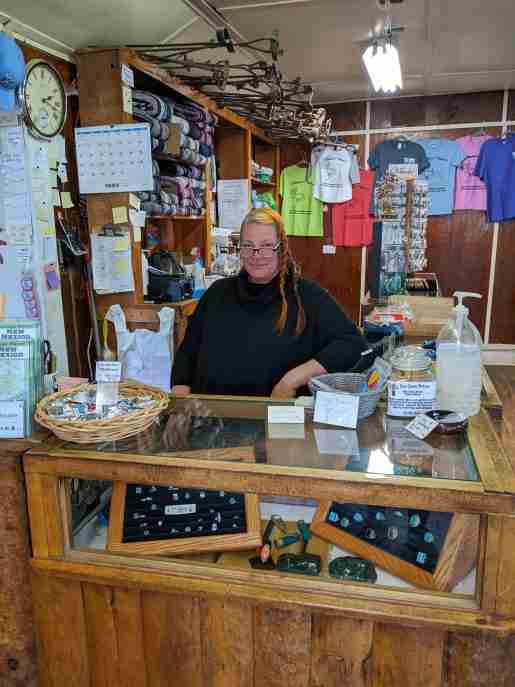 Mugs are strong sellers in their custom product selection, as are magnets, postcards and T-shirts, said Hipp and Vessels.
Other very popular custom items include pictures of visitors snapped inside the cave and photos of the cave turned into a puzzle. Customers also frequently purchase small bags emblazoned with ‘Inner Space Cavern’ on the outside, and fill them with rocks they’ve selected.
Among these, though, “tees are probably number one, which is great because we always name drop our T-shirts,” expressed Vessels.
It’s the customer service, including the friendly service of the cave tour guide, that Vessels credits for selling custom merchandise.
“If people come in and they don’t have a good time, they won’t buy anything,” said Vessels. 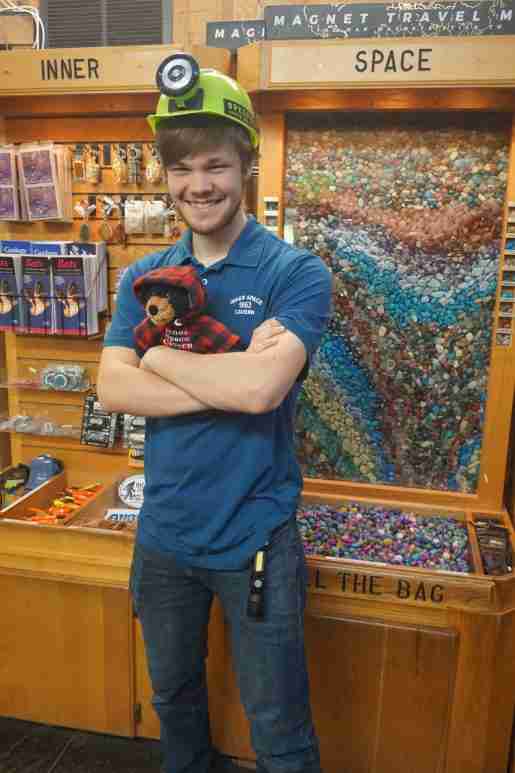 During the pandemic, supply chains for name-dropped clothing had dried up, said Vessels. So when a salesperson dropped by selling boonie hats they took a chance and bought 244 hats – the minimum number they were required to buy if they wanted the hats name-dropped. Normally, they would have turned him away, but because they were so desperate for name-dropped merchandise, they gave the boonie hats a shot. As it turned out, the hats flew out of there – and are still selling, said Vessels.
At the Ice Caves and Bandera Volcano in Grants, N.M., they stock name-dropped merch T-shirts, caps, magnets, keychains, stickers and shot glasses.
Visitors also arrive expecting to find items from in the area like pottery tree ornaments sourced from the Acoma Pueblo approximately 35 miles from the Ice Caves. The ancient Acomas used to venture inside their caves to retrieve ice, reported Debbie Reinschmidt, owner.
Magnets with a photo of the caves on it are big sellers. And T-shirts with sayings like “I climbed the volcano” often catch a visitor’s eye as well. Rocks are also hot picks for guests – some are lava and agate from the local region, but others have been collected from locations across the globe. 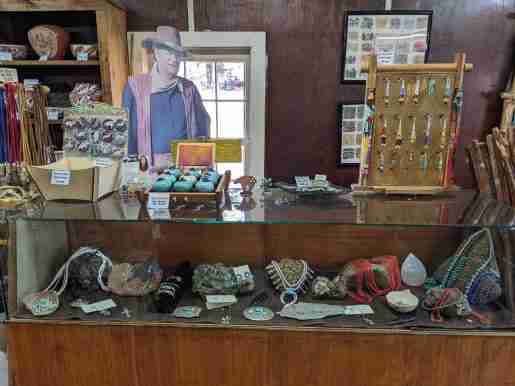 A merchandise display of jewelry and gifts at Ice Caves and Bandera Volcano in Grants, N.M. Magnets with a photo of the caves are big sellers for the attraction.

Magnets, hat pins and patches are best-sellers at the Ice Caves. Reinschmidt said visitors like small, easily portable momentos of their experience as they’re travelling. These items can also occupy a particular space in a visitor’s home – for instance, visitors can put a magnet on their fridge, or put stickers on their cars or RV for a memory of their good time.
At first, Reinschmidt was skeptical about bringing in shot glasses to sell, but they go like crazy, she expressed.
The keychains were another surprise hit. Sales started out slow, but when they stocked up on new keychains featuring pictures of the ice cave, visitors snatched them up. Many have been buying the keychains to use as ornaments, explained Reinschmidt. In fact, this has inspired her to think about also ordering custom ornaments to sell in the future.