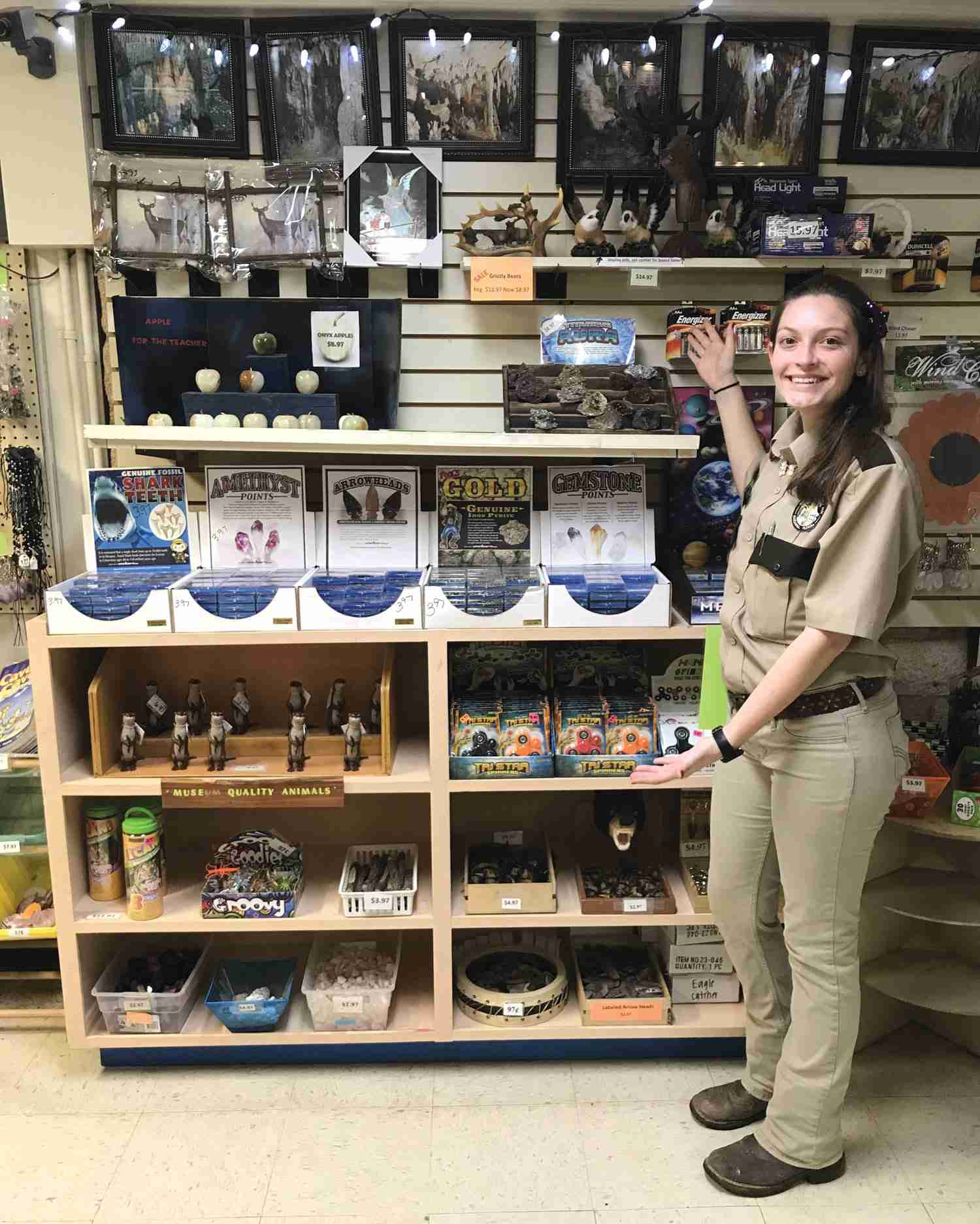 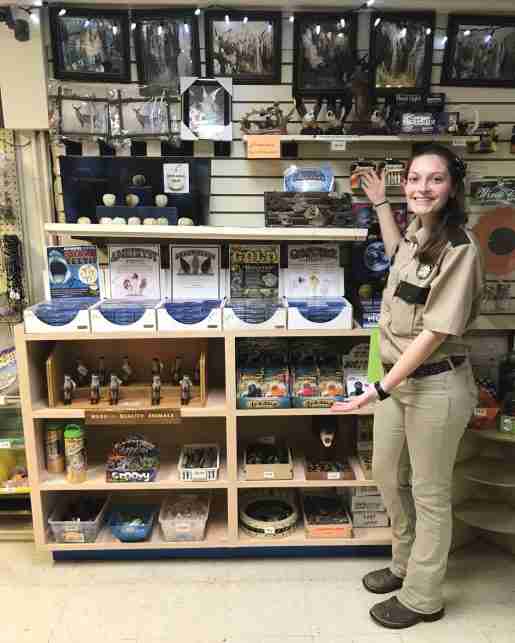 Brooke Peacock of Florida Caverns standing in front of a gemstone display. The store gets a lot of field trip visitors, and its popular quartz gifts are affordable at $2.

While guests aren’t permitted to chisel a bit of rock to take along as a memento of their visits, many public caves include gift shops that feature a wide range of gems and minerals – sometimes native to the area and sometimes imported – for visitors to purchase.

The Ohio Caverns, a show cave near West Liberty, Ohio, was discovered over 100 years ago. It features a variety of interesting attractions including the Crystal King, Ohio’s largest free-hanging stalactite and the Good Luck Crystal.
After visitors complete a tour, they can visit the gift shop, a 1,200-square-foot retail space which, said Manager Aaron Smith, offers a variety of merchandise for all price points. He said the best-selling gems are agate and amethyst. “We have plenty of different amethyst products and a lot of agate, too. People gravitate toward them because they’re colorful and pretty. The agate, especially, has different color bands that people like. We offer a mixture of polished agate and slices of agate that range from $1 for 1-inch-pieces to over $70 for the bigger pieces.” 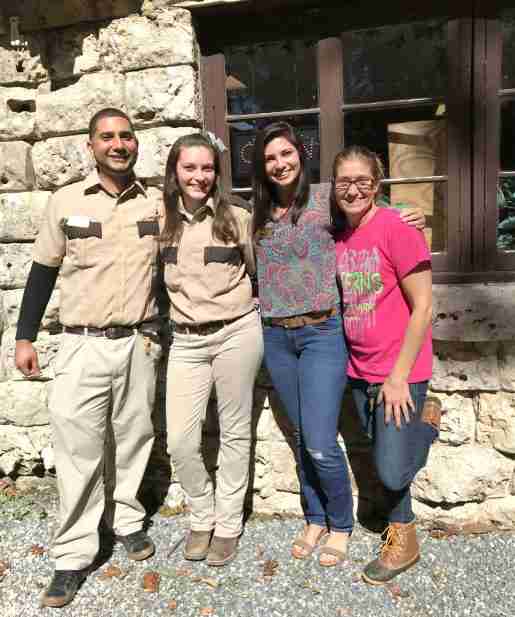 Pictured, of Florida Caverns in Marianna, Fla., from left to right, Robinson Marti, Brooke Peacock, Leah Hicks and Velzie Franklin. The most popular item for the gift store is dyed quartz.

Many of the cave’s annual 50,000-plus visitors are schoolchildren, and Smith said their best-selling pieces are priced low enough so that students on field trips can afford to buy a souvenir to remind them of their trip.

Smith said the most effective ways to demonstrate the merchandise is through different displays separated by type. “We have fossils in one area, and another table with the agate stones and a third area with the amethyst. The agate slices are sitting up so you can see the light shine through them.

“About five years ago we updated the store,” said Smith, “and now everything matches and it’s less like a hodgepodge. That really helped to display things better.”

Souvenirs at Blanchard Springs Caverns. The store manager recommended putting smaller displays of gems and minerals near the register.

When guests have questions about the items, Smith said the staff is well-trained on the main items. “We can look things up ourselves, so we’re also always growing our knowledge,” he said. “But we also have a lot of signs up throughout the store that explain what everything is and where it comes from.”

Knowledge is definitely a key component of selling gems and minerals, said Brandon Freeman, store manager of Sweetwater, Tenn.’s Lost Sea Caverns. This cave is home to America’s largest underground lake and is part of an extensive, historic system called the Craighead Caverns.

Over 150,000 people visit the cave each year, and many stop by the store to browse the gems, minerals, fossils, and other merchandise there. “Our best-seller,” said Freeman, “is the rock/geode we sell, because it’s got a low price point of $4.99, which is more competitive than other places that offer similar products.

“The geode half on the inside is dyed neon green, pink, or purple, and the outer rock portion is kept to its natural brown or black. There are many different color combinations which also adds to its appeal,” Freeman said.
“We also sell a lot of medium and small Himalayan salt lamps. People value them for their [supposed] healing benefits. Our other big seller is the magnets made from polished hematite. You can purchase a 3-by-3 or 3-by-4-inch bag. And again, I’m sure it’s a top seller because of the low price point which appeals to the school groups we get here.” 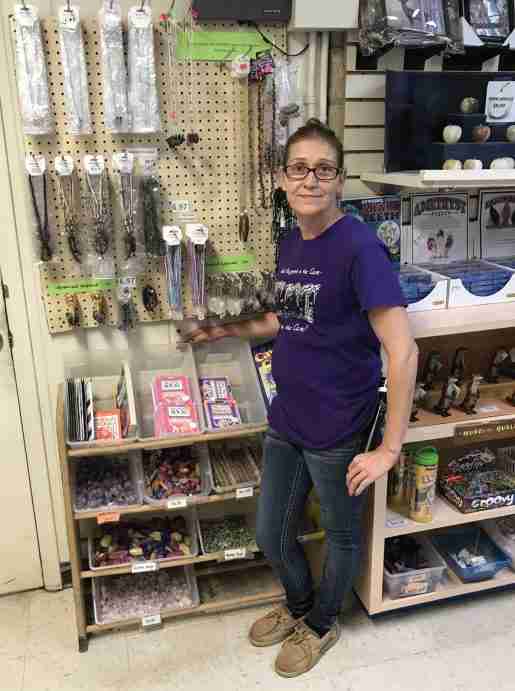 Velzie Franklin in front of a display at Florida Caverns in Florida. The store sells keychains and necklaces that feature smaller gems and minerals.

Freeman said that the displays and information are key to selling more merchandise. “We remodeled the displays and that helped a lot,” he said, “and so does having info cards available and posted everywhere. We added a bin with tumbled, polished rocks and when we included the cards, sales increased.

“We also have our employees and staff who work in the shop train on the marketing [end] so that they can answer questions about the minerals. The staff also gets a good amount of training on the salt lamps so they can explain to customers how to use them properly.”

Some of the 80,000 annual visitors to Blanchard Springs Caverns in Arkansas venture off the more developed path and take the “wild cave” tour, which allows access to the cave’s less developed arts. This second-longest cave in Arkansas features limestone rock that’s more than 350 million years old.

Store Manager Jennifer Sturch said that limestone is a main attraction in the shop. “The best-selling gems and mineral merchandise at our location are the individual rocks themselves! Everyone likes the thought of taking something home with them that’s similar to what’s in the cave, and the rocks are very affordable.” 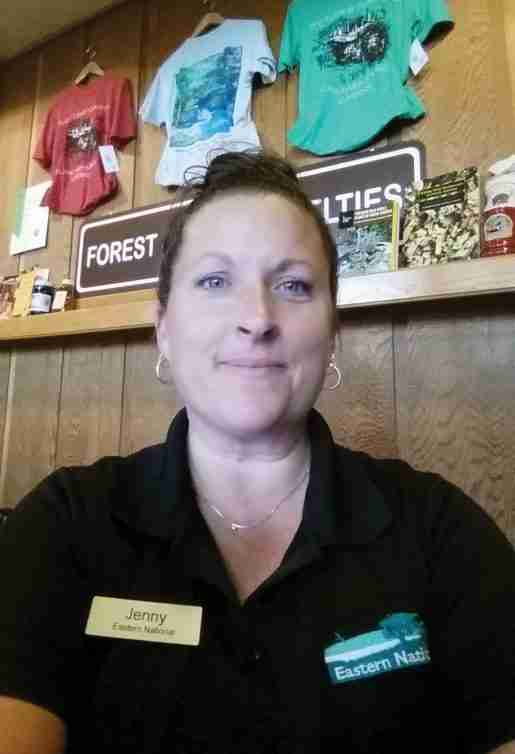 Store Manager Jennifer Sturch of Blanchard Springs Caverns in Arkansas. Souvenir rocks are an affordable way for guests to take home a piece of their experience.

Sturch recommended putting smaller displays of gems and minerals near the register. “If you do this as an impulse item, it works every time,” she said. “We have bins on either side of the register, and we sell a lot of rocks!” The employees can answer questions about the gems and minerals and, said Sturch, “with each rock sale, we give an information card in addition to sharing any personal information we have about the gem or mineral.”

Whether you’re seeking an amethyst cathedra, cephalopod or gastropod fossil, salt lamp or geode, you’ll find it at the 1,700-square-foot gift shop at Niagara Cave in Harmony, Minn. Manager Mark Bishop said the most popular-selling items are the amethyst pieces and tumbled stones. “We have a variety of price points and so these items make an attractive and quick souvenir. They remind people of the cave, and they’ll fit a budget from 50 cents to several thousand dollars.”

This cave also features many fossils and while its 30,000 annual visitors aren’t permitted to remove any from the cave site itself, the shop offers plenty of fossils – another popular item – in a wide range of prices. “This cave is one of the few in the country with so many fossils, like trilobites, and people often purchase them as a way to remind themselves of their visit.”

Bishop’s recommendation for selling more gems and minerals is to focus on the display. “I think it’s important to have everything well-lit and well presented, from thigh-high to eye level. And you want to offer a good price spread so you have larger specimens for serious collectors and less expensive, smaller stuff that allows customers to find something to fit their budget.”

The store and cave, which have average sales of $200K annually, offer plenty of information to the visitors. “We have everything in the store labeled,” said Bishop. “All the fossils and gemstones include ID cards with a detailed background, and we encourage our patrons to take them. If we don’t have an ID card for something – because we might not stock a lot of some of our merchandise – if we don’t have an answer, we’ll look it up. My sons are geologists, so they have a lot of information, too. And,” said Bishop, “we also train our staff and management (besides the guides) to have basic knowledge.”

Florida isn’t really known for its cave systems. But the Florida Caverns State Park, in Marianna, Fla., is the only state park with air-filled caves that are open to the public – and over 270,000 people each year visit these caves. Many also stop in the gift shop to find a souvenir to commemorate their visit.

Assistant Manager Leah Hicks said that the most popular, best-selling gem and mineral merchandise is the dyed quartz. “We purchase these rocks wholesale from a supplier,” she said, “and because it’s a decent size (about two ounces) and reasonably priced, at less than $2, kids can afford it. And we get a lot of field trips here.”

The store also sells keychains and necklaces that feature smaller gems and minerals. “They catch people’s eyes,” said Hicks. “We display them near the toys, because they’re also very colorful – like the dyed quartz. In general, we try to find things that appeal to a younger audience, because that’s our typical demographic. Older people don’t come into the shop as much, so we cater to a younger crowd.”

Although the store can’t sell anything directly from the cave, Hicks said they also sell notecards and books chock-full of information. “Our visitors are welcome to look through the books and, of course, buy them,” she said. “Our staff is also trained to answer many questions, and the state requires training and certification before the guides can work here.”

So whether you’re ready to hike some of the 400 miles in Kentucky’s Mammoth Cave, seek the source of the Lost River in Pennsylvania’s Lost River Caverns, or look for sabre-tooth cat, Ice Age porcupine, and giant ground sloth fossils in West Virginia’s Organ Cave, the treasures you find must remain underground.
But the wide selection of gems and minerals offered by many different cave and cavern gift shops means you don’t have to go home empty-handed.