Sports fans love showing support for their favorite teams. Plush and other toys are one fun way to do just that. Whether as a keepsake, game day souvenir, collectible, or children’s toy, fans enjoy purchasing a wide range of these items.
At the Seattle Team Shop in Seattle, Wash., Assistant Store Manager Jacob Campbell said the approximately 400-square-foot store sells Foco brand plush. Foco is a top manufacturer of plush mascots and bobbleheads. Campbell noted that trends for top-selling items vary by season for the local teams, depending on what teams are playing. “We have small Seahawks and Mariners teddy bears, and medium plush teddy bears for the Huskies, Sounders, and Seahawks. Our largest plush animals are big monkeys, created for the Seahawks.”
For the summer, plush sales stay consistent, as they do throughout the year. “Toys are steady throughout the year. In the summer, our best-sellers at the store tend to be visors and sun hats.” To sell more plush merchandise, Campbell primarily relies on display. “For us, the main thing is placement in the store. We keep the plush items next to the register, so they are the last thing people see, and kids are always excited to see it, and always run to the display. Pricing however is high-end, which makes it a little more challenging as an impulse buy for parents.” 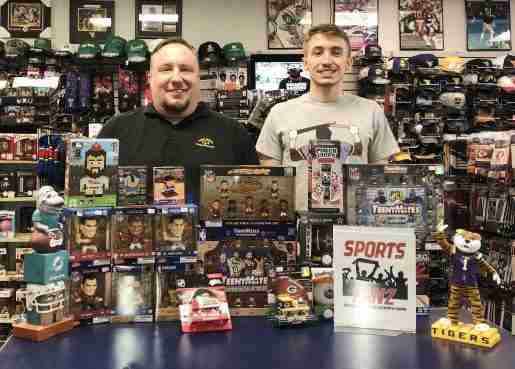 General Manager and Head Buyer Chad Rogers, with Corey Rogers, of Sports Fanz in Hurricane, W.V. Action figures are a tread currently in the toy industry.