The World of Edible Merchandise at General Stores

General stores are worlds waiting to be explored. For this article, we discussed how those worlds have changed due to the spread of COVID-19, and which edible gift gifts tend to sell best.
By far, the best-selling edible souvenir/gift at Nicole Haas’ 2,000-square-foot shop General Store 45 in Littleton, Colo., is Denver-based Hammond’s Candy. “Their latest chocolate bar is chicken and waffles flavored,” Haas said. 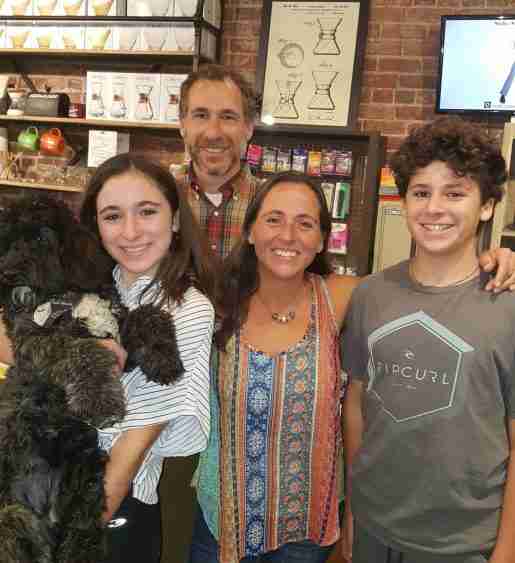 Nicole and Andrew Haas, owners of General Store 45 in Littleton, Colo., photographed with children Mikaela and Jake and the shop dog Bodhi. Hammond’s Candy is best-selling for the store.

Haas said pies from The Village Pie Maker sell well all year, but are also selling as COVID comfort food now. “I tell people they’re my best hostess gift,” said Haas. “There are a few local relators that will bulk order from me during the holidays and distribute them as client gifts.”
Recently, Haas added local Westwood Honey to her product line. “Owner, Matt Scanlan, asked me if I’d be interested in carrying his honey one day,” explained Haas. “It was perfect timing because I had been trying to connect with a local company. Customers are always looking for souvenir honey.”
While Haas said they’ve always been mindful of keeping the store very clean, she’s also beefed up their cleaning standards and follows CDC protocol. They’ve also added shipping, local delivery and curbside pickup options for people that aren’t comfortable coming into the store, Haas said. 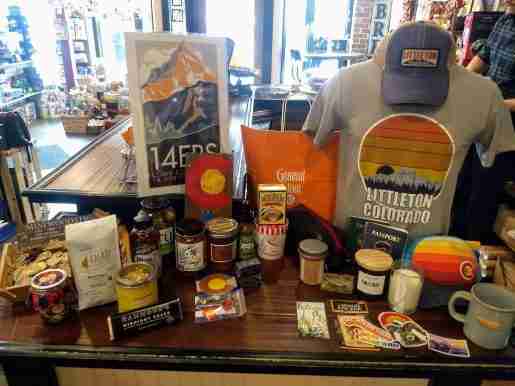 An arrangement of merchandise at General Store 45. The store follows CDC protocol when it comes to cleaning.

Haas has been “focused on staying busy and moving forward.” She’s seized the opportunity to focus on marketing campaigns and setting up an online store to help generate more sales.
At Cone & Steiner General’s three locations, their offerings from Seattle Made businesses (a collaboration of Seattle-based entrepreneurs) are the biggest hits when it comes to edible gifts.    “[These] run the gamut from beverages to bagel chips to preserves to chocolates.” Within that category, any sort of sweet like cookies, chocolates and confection-type goodies–sell best, said Owner Dani Cone. 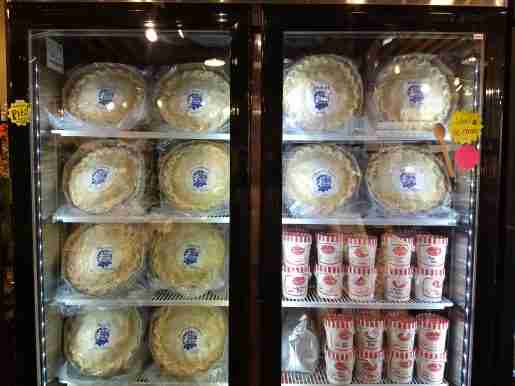 Pie and local ice cream for sale at General Store 45. The good-selling pies are from a company called The Village Pie Maker and are even bulk ordered for client gifts by a few local realtors.

Cone brings in new products when she hears of new makers or producers who become part of Seattle Made.
Cone has been vigilant about following health guidelines. They’ve had to close one location and reduce the hours of another, after seeing a revenue of 2.6 million between all three locations in 2019.
She recognizes how heartbreaking this experience is for many business owners, and said they may need to acknowledge that. “Give yourself a little slice of time to mourn or wallow,” Cone said. 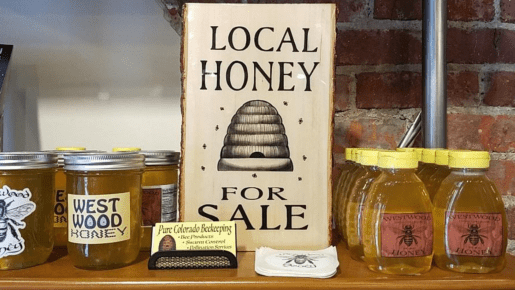 A display of local honey at General Store 45. Westwood Honey is a recent new addition to the store’s merchandise mix.

At the same time, Cone is strategizing her next steps, knowing that even when restrictions are lifted, there will likely be a transition period and a “different landscape on the other side.”
David Crane, owner of the 6,000-square-foot Crane’s General Store in Missouri, said his best- selling edible gifts include BBQ sauces and pickles, pickled eggs and pickled asparagus.
The BBQ sauce that sells best is called Intertwined Swine. The sauce comes in flavors like: “I’m hot and horny” and “I need it Honey.” A couple in their 80s is behind the brand. “When my mom was still alive, I got approval to carry it in the store–she found it funny,” Crane said.
He recently brought in Hoff’s Sauce from Tennessee. Hoff’s found Crane through Instagram, and sent samples, which included a caffeinated hot sauce. 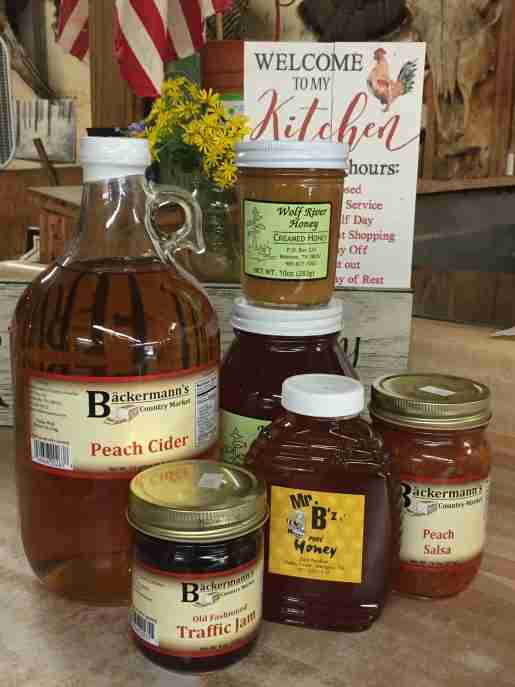 Crane has turned to promoting essential items on social media and meeting customers outside with their order. “Everyday I get stock in, I take pictures with prices so people can zoom in and we can shop for them. We’re try to show we’re here to serve,” Crane said.
At the 1,400-square-foot Knightsville General Store and Country Café in Summerville, S.C., Owner Lori Sparks said local hot sauce, spices, BBQ sauce and grilling sauce, along with local honey are all big sellers. Rina’s jams and jellies are also popular. Since Rina’s been in business in Summerville for over 30 years, customers have come to trust the product, and enjoy the unique flavors she offers, such as her sweet tea jam.
Ordering in new edible gift items has been a trial and error process for Sparks. She’s learned to find items with a longer shelf life, since these items suit the lower volume of edible gifts she currently sells at the store. 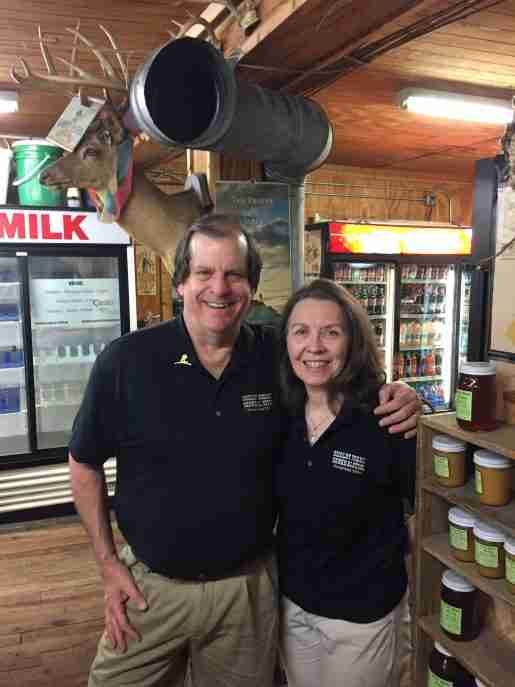 On milder days, Sparks props the door open so people don’t have to touch door handles. But, when the weather heats up, Sparks sanitizes the handles, and “if [customers] touch anything else, I go behind them and sanitize everything.”
Sparks advised other retailers to “find things that’ll sell during this time.” For Sparks, this means focusing on selling more family meals. She’s found many aren’t interested in cooking, even when relegated to their homes.
Sheri Moretz, owner at Mast General Store in Valle Crucis, N.C., said customers love putting together their own gift baskets with jams/jellies, mixes, honeys, and so on. Apple butter seems to be everyone’s favorite basket item.
Moretz likes to discover small, local companies and give them exposure on Mast’s shelves. “It’s really important to attend the Made in ___________ (you fill in the blank with your state) events to stock your shelves with unique items,” Moretz said.
Unfortunately, Moretz said they’ve had to close all of their locations, due to the stay-at-home orders in place in most communities. But they do have a small group of staff fulfilling orders, who wash and sanitize their hands frequently.
Moretz said the store tries to keep relevant and useful. This means offering Deals of the Day, which can include activities for kids, food staples and candies for Easter. “We are also sending out messages that are positive and focus on helping our neighbors, like our Gift Cards for Good program,” said Moretz.    “When people purchase a gift card to our stores, we will give 20% of the amount to our local food security partners.” 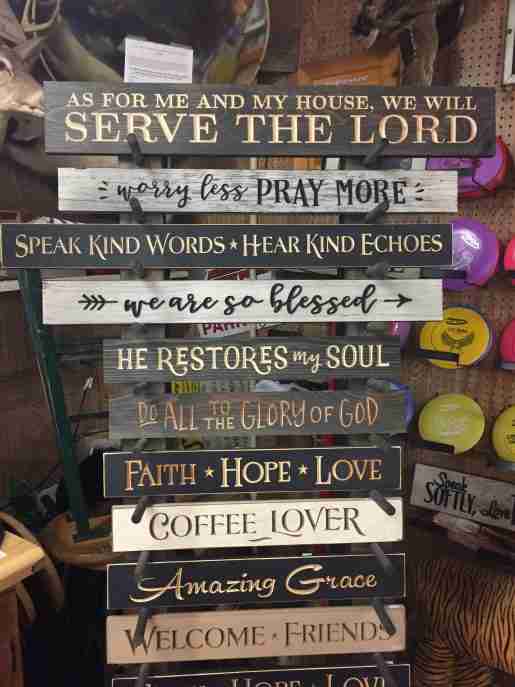 Decorative signs photographed at the Shelby Forest General Store. The store is a relaxing place for shoppers, one of the owners said.

Shelby Forest General Store can be found in the tiny community of North Shelby County–five minutes out from the edge of Memphis. Doug Ammons, who owns the 2,384-square-foot store with his wife Kristin, said that last year, the Memphis/Shelby County area saw 11.8 million tourists.
Their restaurant makes up nearly half of their sales. But when it comes to edible gifts, their best sellers include a broad assortment of jellies and jams, creamed honeys, ciders, molasses and fried fruit pies. They source these primarily through a nearby Mennonite processor and provider, as well as two additional local honey purveyors.
During peak season, they sell 450 to 500 fried fruit pies–with flavors including peach, coconut cream and pecan–per week. Their F-R-O-G jam (which stands for Fig, Raspberry, Orange and Ginger) is another big seller. “Without question, that is our best-selling edible gift item because it’s a conversation piece,” Ammons said.
When adding new product to the shop, the Ammons’ often expand on types of items they already carry. For instance, six months ago, they had three flavors of cider (apple, cinnamon and peach) – now, they carry over a dozen, including cherry, blackberry, muscadine grape and granny smith apple cider. They’ve also expanded their line of fried fruit pies and creamed honeys. “The more flavors you have, the more you sell,” Ammons said. 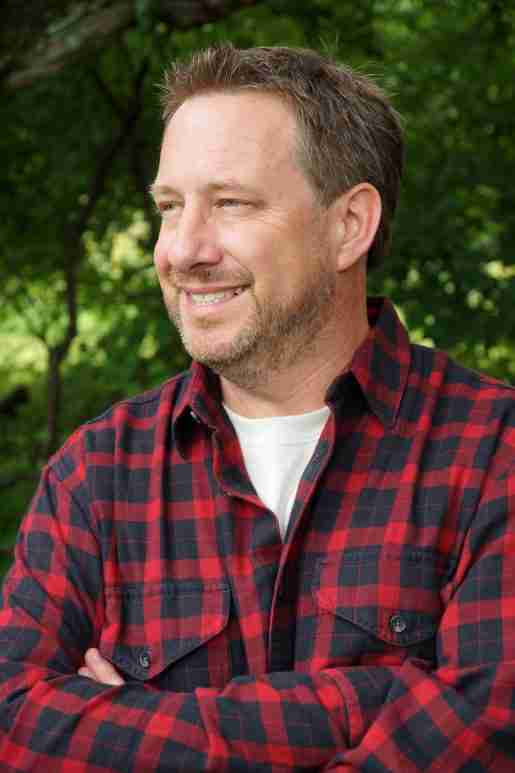 Sanitizing the store is a top priority. “We are here because we want to be here – seven days a week for 17 years. We are committed and passionate to this,” said Ammons. “We’re not just ‘dabbing’ at it: We’re hitting every surface with Clorox/409 and Lysol. We want to make sure our environment is as sanitized as can be for staff and customers.”
This cleaning routine occurs before opening and upon shut down. They also don gloves and adhere to the 6-foot distancing guidelines. “Normally, people are in here elbow to armpit packed in like sardines,” said Ammons. Now, he explained, it’s carryout only, which sadly fractures the ambiance and magical experience local and international guests normally enjoy at their 86-year-old store. 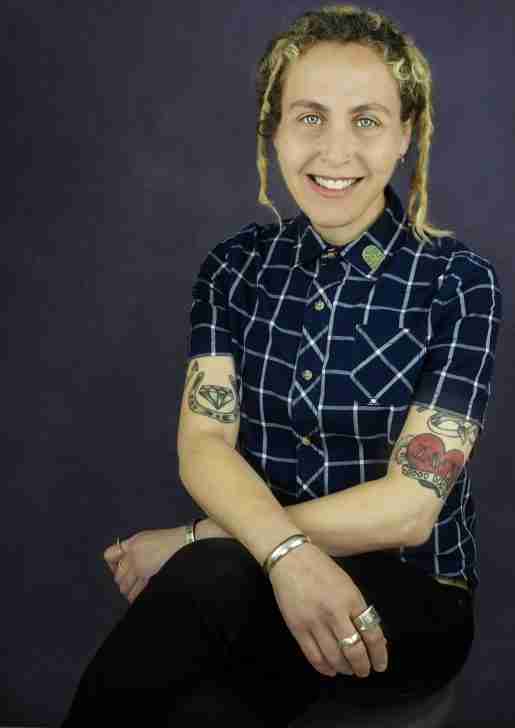 Ammons said it’s a shop owner’s attitude that will make the biggest difference in this climate. When people visit the shop, the Ammons’ can see they’re worn out by the news, panic and fear. “You can see the relief just roll off their face when they enter our shop–it’s like going back to grandma’s house–it’s like therapy,” Ammons said.
“We are a resilient lot, we will endure, prevail and sooner or later, we will triumph. We are going to keep right on busting our tails and keep smiling and inspire hope.”

Coffee and malted milk balls photographed at a Cone & Steiner store. Edible gifts are big sellers for the store.