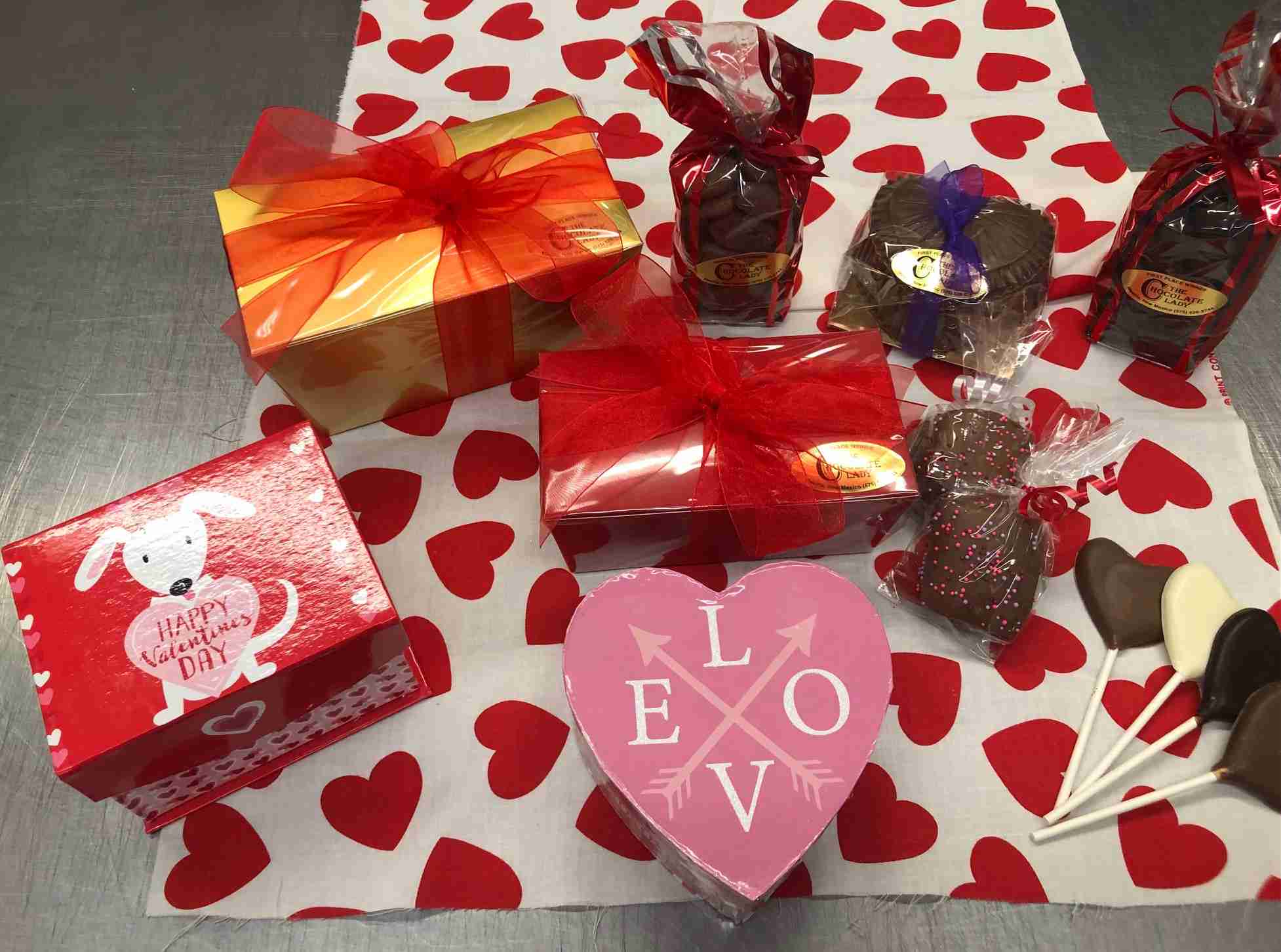 Gourmet chocolates number among the top gift selections at Maureen’s Sweet Shoppe in Longmeadow, Mass. Customers clamor for all kinds of chocolate covered toffees, creams, truffles and even dipped Oreos, most of which are made right on the premises. “Especially in times like these, people like to go to comfort foods and chocolate is probably one of the number one comfort foods out there,” said store Owner Maureen Basile.
In business since 2009, Maureen’s Sweet Shoppe has added a lot to its product line over the years. Recently, the 1,200-square-foot store has been experimenting with new twists on truffles and spins on the salted caramel trend. “We just take what we have and build on it,” said Basile. For instance, instead of traditional truffles which are chocolate-encased, staff layers thick and incredibly decadent ganache into a mold along with a featured flavor. “At Christmas, we did a peppermint bark version of a truffle. It was so popular we barely kept up with demand. Right now, we have a layered peanut butter truffle that’s like a peanut butter cup without the shell.” 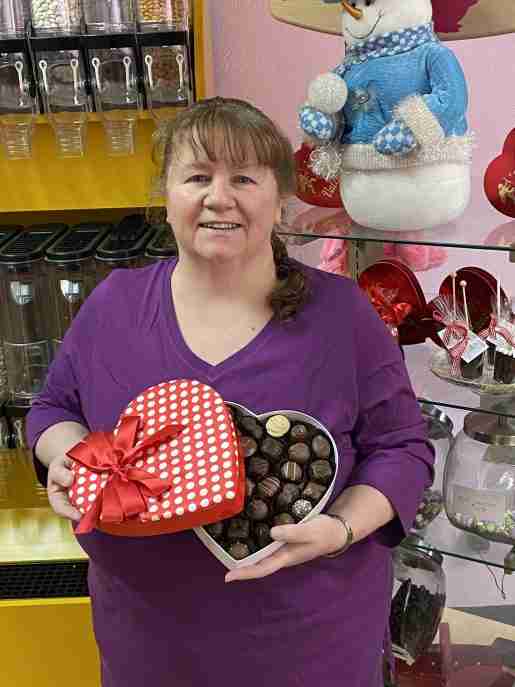 Suggestions from customers and taste trends influence the experimentation that goes on in Maureen’s Sweet Shoppe’s kitchen. They already featured a caramel coated Oreo for example but thought to try a salted caramel version. It’s been a big hit. Shoppers favor the products made in-house versus something brought in, Basile noted. It’s a continuing theme of the pandemic that she welcomes. Currently, the store is working on developing some Keto-friendly treats. “It’s not as easy as it may seem but many people are so sugar-conscious now, we’re trying to come up with alternatives to keep them as customers,” Basile concluded.
At The Chocolate Lady in Mesilla, N.M., the top selling gourmet gifts tend to revolve around the same group of confections. “We call them the three T’s – turtles, toffee and truffles,” said Owner Linda Ramirez Jackson. Ninety-five percent of their product is made in-house in small batches so it’s guaranteed fresh and always beautifully packaged. During February for Valentine’s Day, the cozy retail space is known for its chocolate-dipped strawberries. “We make them fresh every morning and we take pre-orders.” 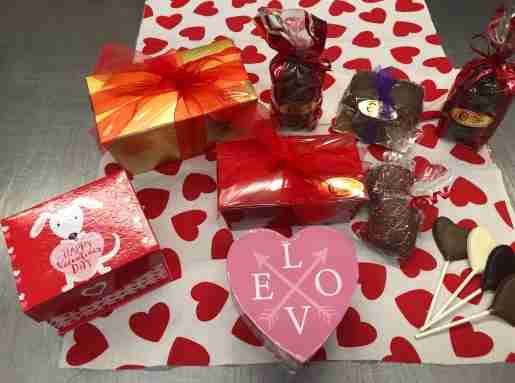 Valentine’s Day gifts at The Chocolate Lady. During February, the store is known for its chocolate-dipped strawberries, which are made fresh each morning.

Jackson bought the business in 1999 from the previous owner who had run it for 13 years. She renamed it The Chocolate Lady. The establishment just marked its 35th anniversary, making it one of the oldest on the historic Old Mesilla Plaza. After 22 years, Jackson knows the peak periods for selling chocolate – and summer isn’t one of them. “So, we came up with the idea of chocolate-dipped bananas, chocolate-dipped cheesecake, frozen chocolate-dipped strawberries to get us through the hot months. It works!” Homemade ice cream even appears on occasion, especially during strawberry season. 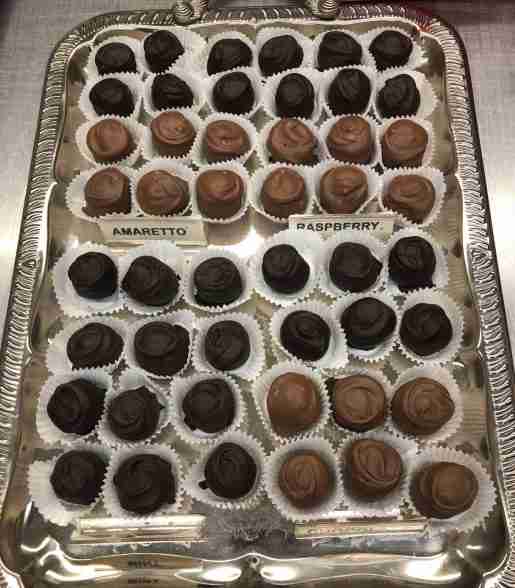 Chocolates and other confections from The Chocolate Lady’s candy selection. Ninety-five percent of the store’s merchandise is made in-house in small batches, and is always beautifully packaged.

The Chocolate Lady is flirting with the idea of making bark with chilis. “We get requests for jalapenos dipped in chocolate, bacon too. But I keep telling people these items don’t have a very long shelf life,” said Jackson. As a result, she is very picky about the kinds of novelty items her store will feature and when. “We’ll make caramel apples every once in a while, but we make sure to advertise the fact, usually on Facebook.”
Handmade bonbons top the best-seller list at Maggie’s Candy Kitchen & Bakery in Pueblo, Colo. “Creamy ganache center bonbons in a variety of flavors including liqueurs all do really well for us,” said Nettie Williams who co-owns the business with her sister Pennie Gaudi. It is an enterprise their mother and great aunt started back in 1960 in Lancaster, Calif., and that the sisters relaunched in 2018 in Colorado. Bonbons are only the beginning of the extensive confectionary offered inside the 2,200-square-foot store. Turtles, coconut clusters, four different kinds of brittle, five different kinds of fudge and more are all popular, not to mention different nuts coated in milk and dark chocolate. “If a customer is building a 32-piece box of chocolates, they can pick between the bonbons and the nuts,” Williams explained. 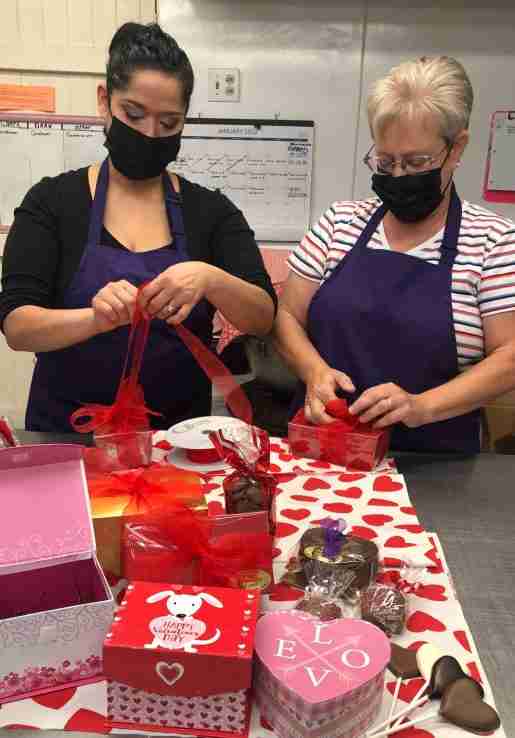 Two unidentified individuals working on merchandise at The Chocolate Lady. Top sellers for the store include turtles, toffee and truffles, according to the owner.

Anyone longing for candy they remember from childhood will likely find it at Maggie’s Candy Kitchen & Bakery, which per its name also bakes custom cakes and cookies including Italian varieties. “We have a whole storefront of nostalgic candies we bring in that people can’t find anyplace else. Kids just go crazy in here. Their parents do too,” said Williams. Pennie Gaudi handles the ordering and does her best to keep up with requests. Meanwhile, hot chocolate bombs have been trending the past couple of years for the store and every couple of months, the store features a different kind of specialty fudge. “This January and February, it’s chocolate cherry. In the summer, it might be blueberry and then we’ll do eggnog and pumpkin varieties in the winter months and other flavors in keeping with the seasons,” she concluded. 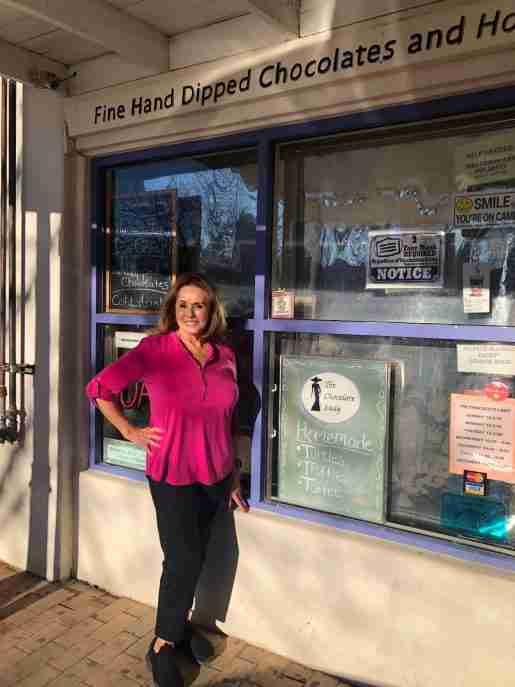 Chocolates rank among the top-selling gourmet gifts inside Love at First Bite, a specialty shop in Idaho Falls, Idaho. “People are always looking for boxed chocolate to give as gifts,” said Julie Richards who co-owns the 11-year-old business with her husband Mike Richards. A handsome display case inside their 5,000-square-foot retail space features hand dipped chocolates and truffles. “Some we make and some we don’t,” explained Julie. Caramel and chocolate dipped pretzels and apples, fudge, cupcakes, cookies and other baked goods are also on offer. 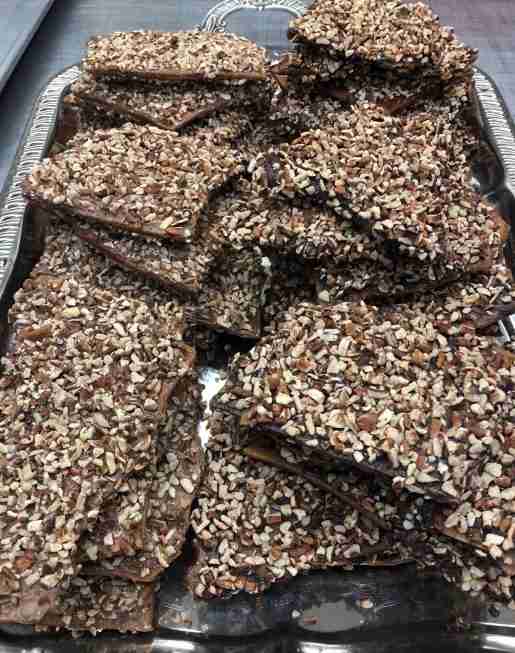 Chocolates and other confections from The Chocolate Lady’s candy selection. Ninety-five percent of the store’s merchandise is made in-house in small batches, and is always beautifully packaged.

In terms of new merchandise, Love at First Bite is mindful of the time of year. “Every holiday, we’ll decorate pretzels differently or we’ll put sprinkles on the dipped apples or make and bring in candy that matches the season,” Julie said. During Christmas 2020, the store got on board with hot chocolate bombs which were met enthusiastically by customers. “This past season we didn’t sell as many as I thought we would of the ones we brought in. But the ones we had time to make – well, we could have sold a lot more. People tend to want you to make it!” she concluded with a laugh.

Are Customers Looking for Small Treats or
for Big Boxes of Candy? 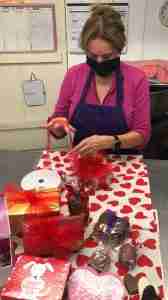 Owner Linda Ramirez Jackson of The Chocolate Lady in Mesilla, N.M., working with candy packaging. Individuals are just as likely to pick up a small item as a big box of candy, she said, and during the holidays, the store frequently handles large corporate orders.

At Maureen’s Sweet Shoppe in Longmeadow, Mass., customers opted for larger boxes of chocolate this past holiday season – a pound versus a half pound or two pounds versus a pound. “I think since people didn’t get together last year, they wanted to make it more special this time around,” said store Owner Maureen Basile. Normally, price point and a gift giver’s relationship to a person drives decision-making.
“It just depends on what they’re celebrating,” said Linda Ramirez Jackson, owner of The Chocolate Lady in Mesilla, N.M. Individuals are just as likely to pick up a small item as a big box of candy. During the holidays, the store frequently handles large corporate orders.
Customers stopping by Maggie’s Candy Kitchen & Bakery in Pueblo, Colo., are more inclined to pick up small treats to give as gifts. “Items like our 4.5-ounce packages of brittle or quarter-pound packages of fudge. We also have small clear boxes that we can put small amounts of bonbons in so they can get a package of four or a package of eight. Customers will grab things like that,” explained Nettie Williams, who co-owns the business with her sister Pennie Gaudi.
Customers favor the small bags of treats Love at First Bite in Idaho Falls, Idaho assembles. “A selection of chocolates or pretzels or a candy apple – they make nice small gifts under $10. However, customers will sometimes go for small boxes of chocolates under $30,” said Julie Richards who co-owns the business with her husband Mike. “It all depends on the occasion and their budget.”