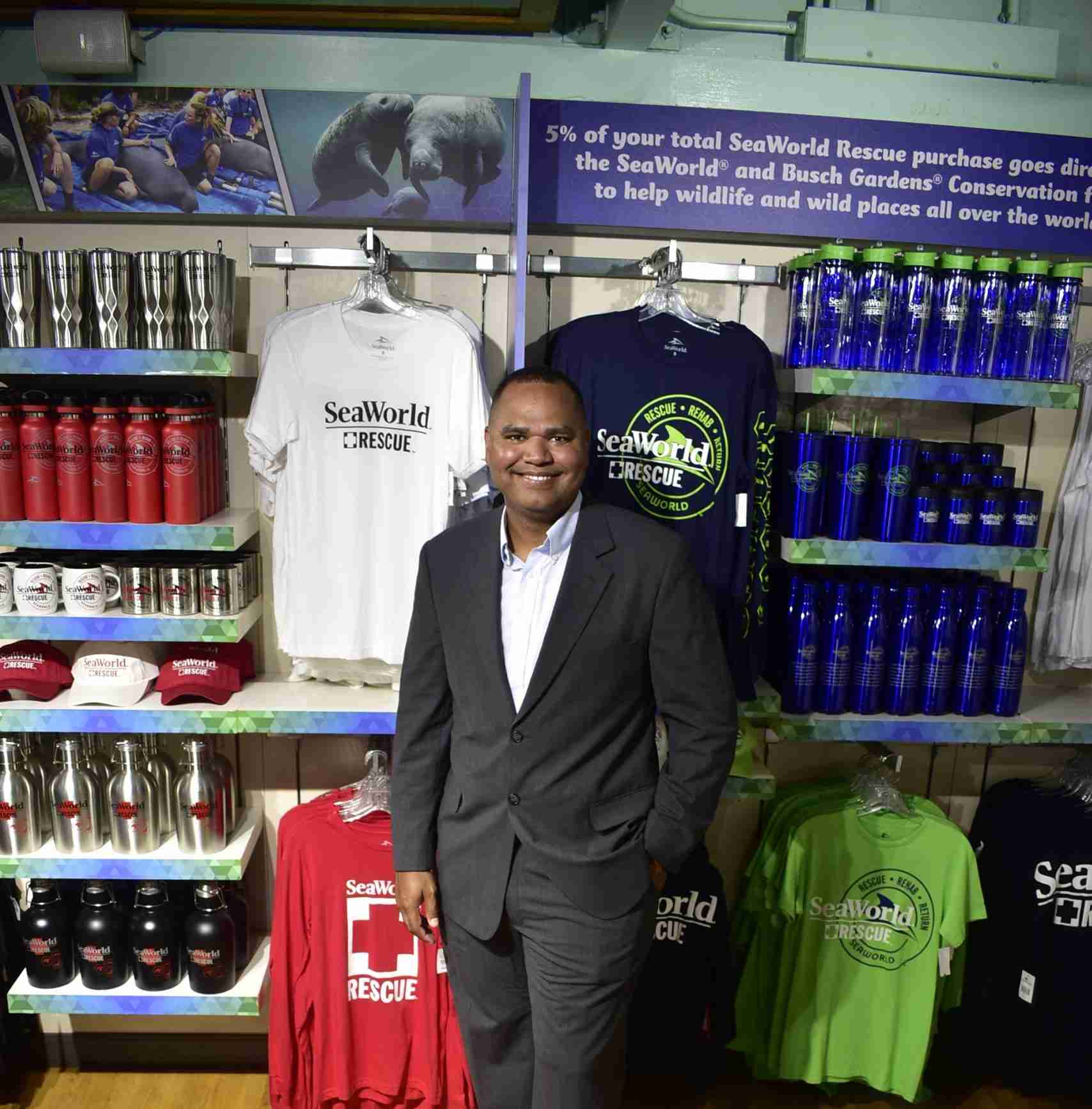 When asking Ron Gustafson, director of marketing and public relations at Quassy Amusement & Waterpark in Middlebury, Conn., about the park’s most popular souvenir item among adults, it was an easy answer—a wooden shot glass featuring the logo of its Wooden Warrior roller coaster. 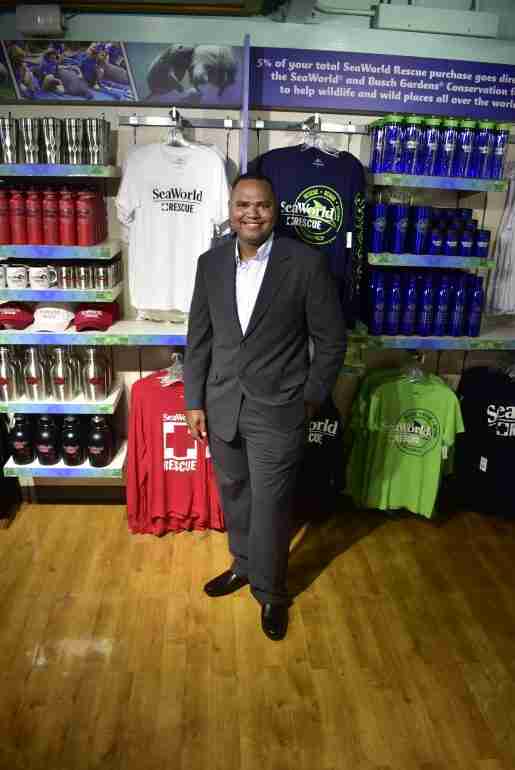 “Both shot glass collectors and roller coaster enthusiasts purchase this item,” Gustafson said. The Wooden Warrior has been the park’s marquee roller coaster since the ride opened in 2011.
Logoed tie-dyed T-shirts for both adults and kids also sell well. “We started bringing them in off a hunch,” said Gustafson, who added that they’re a throwback to the 1970s. “I think the draw is that a lot of parents and grandparents grew up in that era when tie-dye was popular. Kids like them because they’re colorful. We offer bright colors for kids and darker colors for adults.”
Logoed caps are also a hot item at Quassy Amusement & Waterpark. “People enjoy having something useable,” Gustafson said. Some people might also buy one because they forgot to bring a cap and realize that they need one. 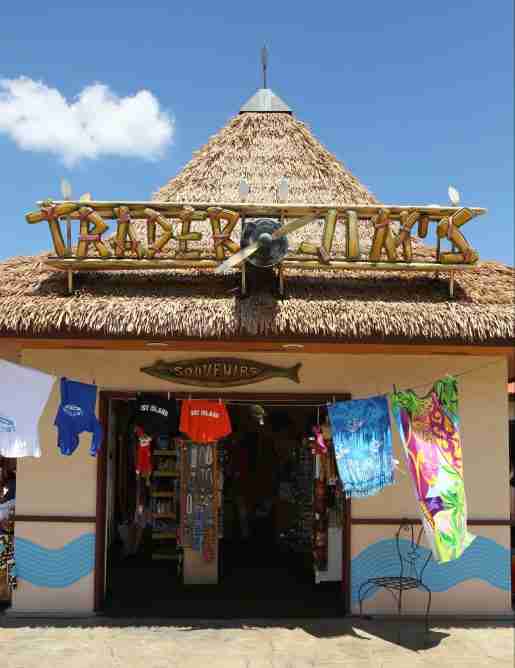 An exterior view of the Trader Jim’s Souvenir Store at Lost Island Waterpark. Park Owner Rebecca Bertch said since the decks get hot, water shoes are popular sellers for the shop.

Shot glasses are also popular for Lisa Hogan, director of operations at Rapids Water Park in West Palm Beach, Fla. “It’s a small, popular collectible item with the park’s name on it,” she said. “Many people collect shot glasses and magnets of places they’ve visited.” Magnets display the names of the park’s most popular rides.
Beach towels are also sought after, Hogan said, because they serve as both a necessity and souvenir. “Many people forget to bring a towel while others purchase one of our custom designed prints with an image of the park as a memory,” she said. 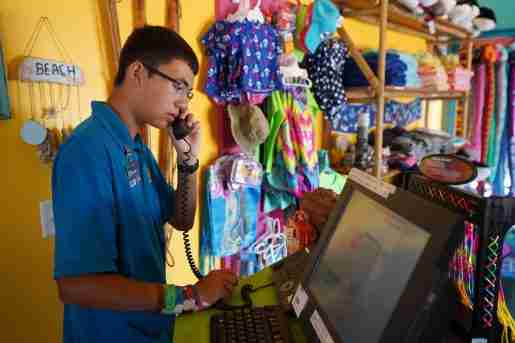 Photographed at the register was Associate Christian Holbert of Lost Island Waterpark in Waterloo, Iowa. Shot glasses rule the sales roost as souvenirs, and the designs are changed annually.

Shot glasses also rule the roost at Lost Island Waterpark in Waterloo, Iowa, said Owner Rebecca Bertch. They have become collector pieces because they change every year. Water shoes are popular because the park’s decks get pretty hot and sunglasses are a hit because guests forget to bring them. The park has 476 square feet of retail space.
Christopher Thompson, vice president of retail and ancillary revenue at Sea World Parks & Entertainment in Orlando, Fla., said adult guests enjoy the park’s apparel offerings. “Not only does apparel provide adults with a way to capture their experience or show their love for their favorite animal species or attraction, but it also helps with possible needs during their visit, such as replacing a wet shirt,” he said.
In addition, Thompson said that guests love functional products. The park’s wide range of stores, which range from small carts to very large facilities, offer a series of vessels from reusable water bottles to ceramic coffee mugs.
Sea World guests also love collectable souvenirs such as magnets. “Capturing a memory that marks the park, ride, city or animal they experienced is a winner,” he said.

Top Souvenirs for Kids and Teens
For younger guests, Thompson said their top souvenir is exclusive plush that connects guests to the animals and characters they interacted with.
Furthermore, branded interactive toys are also popular. “When you walk around the parks, it’s usually hard to miss a kid with a bubble toy blowing on the pathway,” Thompson said. “The interactive toys are not only a souvenir, but they also have a play factor while enjoying the day.”
Another top product for teens and kids is accessories, specifically jewelry, Thompson said. The shops offer a wide variety of jewelry ranging from name bracelets to trendy turtle jewelry. 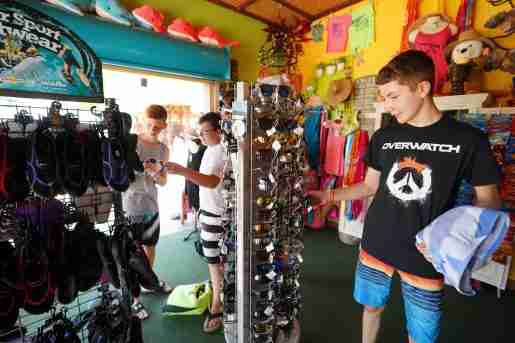 Customers looking at merchandise, including sunglasses, at a Lost Island Park store. Sunglasses are a hit with customers who forget to bring them, according to the attraction’s owner.

Plush is also a winner for Bertch, most notably sea-related creatures such as dolphins, mermaids and turtles. “They are placed in bins on the floor, so they’re easily accessible for kids to pick up,” she said. “Another favorite is plush with its arms wrapped around a lollipop.”
Gustafson said kids gravitate toward plastic license plates featuring a collage of park photos and their first name. They are displayed on a steel stand with a rotating rack in the shop, which has about 600 square feet of retail space.
Other popular picks for kids are coil springs made of plastic. Similar to a Slinky but smaller, they are multi-colored and can be logoed, Gustafson said. They sell for under $5. Pin art by Rhode Island Novelty, in which kids can make imprints in a 4-by-6 inch bed of plastic pins, also fly off the shelves.

Finding Unique Souvenirs
When looking for new items to stock, Gustafson goes to the IAPPA Expo. He does 90 percent of his purchasing for the next season there. “It’s also a good time to talk to vendors; I learn about hot items and what’s coming up,” he said.
New for 2020 are Belly Buddies, a small plush animal from Rhode Island Novelty that comes with a necklace that can be snapped on. Gustafson purchased an assortment and sells them for $4 each, after only paying 70 cents per item.
Hogan looks to see what merchandise is popular at Rapids Water Park’s sister parks. She also searches industry publications and attends industry shows such as Surf Expo.
Much of what Bertch stocks in the store are necessities that some folks need, such as lotion, goggles and sunglasses. She stocks mostly water-related animals in the plush and jewelry sections.

Top Display Tips
When looking to capture customers’ eyes, Thompson advised displaying products in a way that guests can quickly digest them. Guests often stop to buy souvenirs at the end of their day at a park, and are likely exhausted.
When displaying products, Gustafson makes sure that each item contains a price tag. “If a guest picks up something and it isn’t priced, they will put it back on the shelf,” he said. “We put the base price on every item and indicate that tax is additional. Signage states what the tax will be.”
Gustafson recommended keeping glassware on one side of the gift shop where it’s easily seen by a cashier, so they can tell children to be careful in that area. Glassware is also kept higher up on shelves, so young children can’t reach it. Tie-dye shirts are fully displayed by color on wall racks, so visitors can see colors and sizes in one display.
When it comes to displays, Bertch lives by a tip she once heard at a Disney seminar, “pile it high and watch it fly.” She tries to keep all shelves stocked and easily accessible to guests. 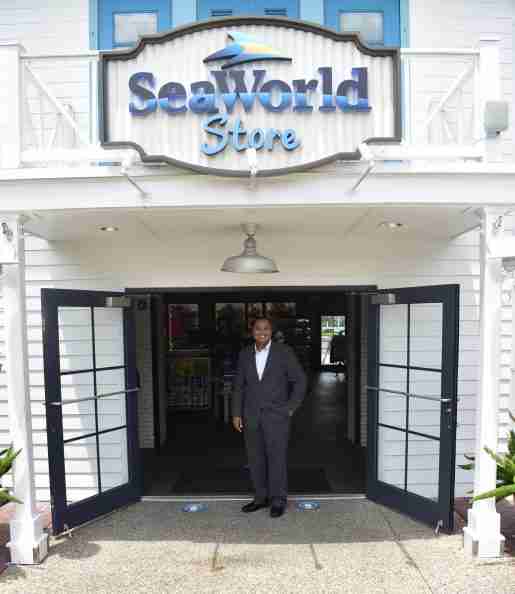 Photographed outside of a Sea World store was retail and revenue official Christopher Thompson. Guests love functional products, according to Thompson.

Sales Outlook
Due to the COVID-19 pandemic, gift shop sales are not surprisingly down at many water and theme parks this year, including sales at Quassy Amusement & Waterpark. “We can’t have group events and day traffic is off,” Gustafson said. “We are limited by state mandates on the number of people allowed in the park.”
Likewise, Hogan said sales are down because the park was temporarily closed for two months due to COVID-19. Per cap is actually up, though. The gift shop is 1,000 square feet with a small kiosk on the outside.
Conversely, Bertch said the park has met last year’s cumulative sales even though the park opened up two weeks later due to the virus. “People that visit the park this year are shopping in our store,” she said.