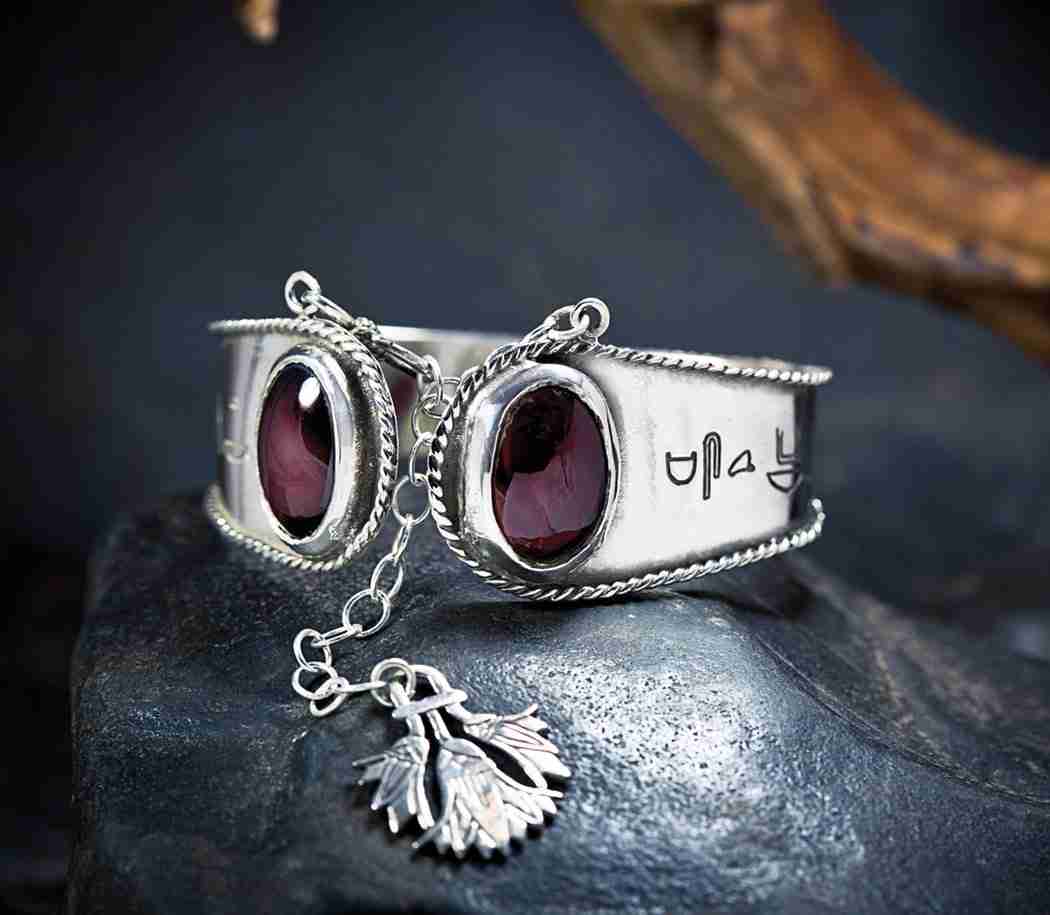 The silver pendant is believed to bring joy, love and peace to anyone who wears it. Yaron Shaool, the Ka Gold Jewelry shop manager in Israel, said that the special pendant – which is rife with ancient symbolism – is among the most popular being sold to customers around the world. Designed by Judy Hilton and Pat Crelly – and created by artist David Weitzman – the piece was inspired by the connection between two souls. 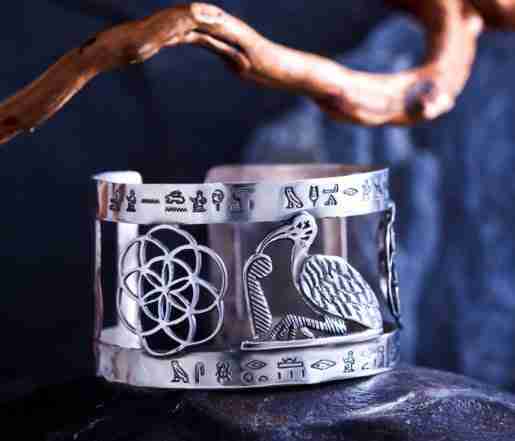 Bracelets available at Ka Gold Jewelry. The store offers jewelry that is crafted with inspiration from divine providence.

“It begins with two yin yang shapes,” explained Crelly, “that represent two souls. One is the opposite image of the other because they each carry different dominant forces within them.”
The pendant is just one of several strong selling pieces that provide inspiration at Ka Gold where Weitzman called himself the “cosmic jewelry artist.” He said his biggest inspiration comes from how he can make a difference in peoples’ lives.
“My work harnesses the power of spiritual symbols and sacred geometry from around the world to bring those wearing my sacred jewelry happiness, vitality, excitement and love,” he said. “My jewels are meticulously crafted to work on a conscious and subconscious level to inspire peoples’ lives.” 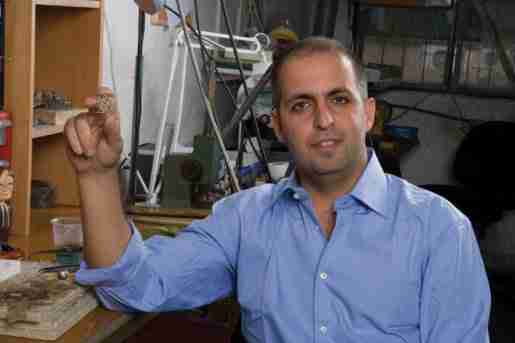 Artist David Weitzman holding a jewelry piece. Weitzman calls himself the cosmic jewelry artist and said his biggest inspiration comes from how he can make a difference in peoples’ lives. His jewelry is available from Ka Gold Jewelry in Israel and online.

Other popular pendants being sold include the Flower of Life, Geneva Crystal, Merkaba Prana Sphere and Christ Consciousness. Each of the pieces is tied to ancient beliefs and symbols that seem to transcend the usual understanding about religion. Weitzman and Shaool both seem to operate as if on a higher plane themselves, crafting and merchandising handmade pieces inspired by divine providence – and creating a very successful business model in the process.
“I think what makes them appealing is they are all known sacred geometry shapes that people love,” explained Shaool. “There is also the sense of authenticity that rises from the jewelry. One can see and feel it is truly an art work.”
The jewelry is inspired by a variety of belief systems ranging from ancient symbols and mystic traditions to Buddhist, Kabbalah, Sacred Geometry, Mayan traditions and even ancient Egyptian mythology. The jewelry pieces include not only the popular pendants, but also a variety of rings, bracelets, earrings and personal talismans that speak to Jewish, Kabbalah, Tibetan, Japanese, Buddhist and Astrological beliefs. There is even a line of New Age and eco-friendly items that include lotus and dragon symbols. 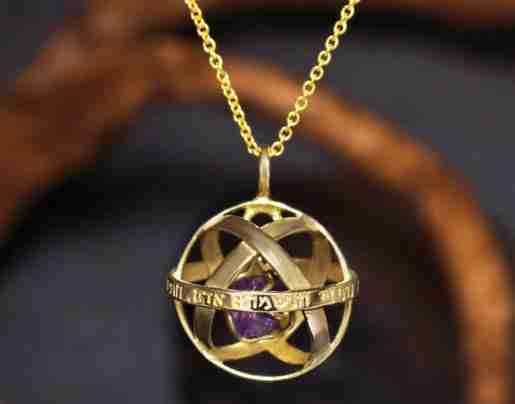 Jewelry from Ka Gold Jewelry. Since the business was founded in 2005, the owners estimate that they have reached as many as tens of thousands of customers both in their store and online.

Since the business was founded in 2005, Shaool, then an Internet entrepreneur, estimated that he and Weitzman have reached as many as tens of thousands of customers with this handmade jewelry both in person and online. Weitzman has actually been making his famous Merkaba pendant – still a top seller – since the late 1990s.

The Past and Pop Culture
At Enchanted Jewelry in Long Beach, Calif., Owner Katie Katz is interested in bringing the best in metaphysical and fantasy jewelry to the retail market, both at the brick-and-mortar location and online. These days, she said, thanks to the popularity of such television shows as Game of Thrones, there’s an interest in Viking and Nordic lines. Warrior symbolism is particularly popular this year, she said.
The shop also carries the complete Starlinks symbolic jewelry line, as well as Nature’s Power Pendants, Gothic fantasy jewelry, Reiki jewelry, VooDoo charms and other amulets, talismans and crystals. 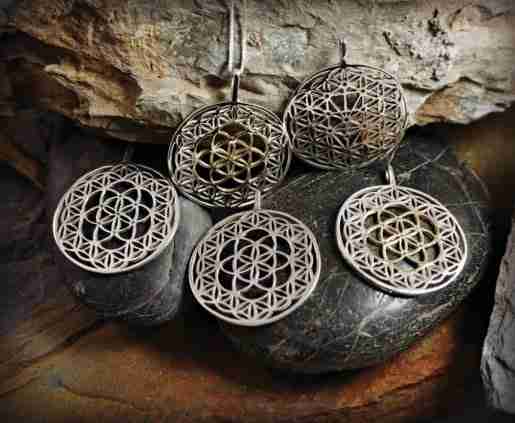 A group of pendants that are available from Ka Gold Jewelry. The store’s meaningful jewelry is sold to customers around the world.

“We sell a lot of love vials,” said Katz, “little pendants you can fill with remains or hair, fur and other mementos, like prayer scrolls.” Customers generally wear the vials around their necks with important, customizable material kept safely inside.
Jewelry having to do with the ancient runes is becoming more popular, as are items associated with the occult and spiritual divination. “We always sell many magical charms, as well as six-pointed stars,” she explained. The items are showcased in factory displays, on pegs and in glass cases depending on price points. The more expensive pieces are kept behind glass while the less expensive items (under $10) are hung on pegs and other displays.
She said using displays with specific lines often helps keep track of inventory: “It really helps us keep track of stock.”

Getting Back to the Earth
Green Earth Stones, a family-owned metaphysical shop in Bowling Green, Ky., opened in 2008 first as a website and later grew into a brick-and-mortar store three years ago. The shop carries a large selection of crystals, gemstone jewelry, essential oils, herbs, smudge supplies, candles, home decor, books and tarot cards, and even offers small classes focused on meditation and tarot reading.
The shop also sells a lot of standard gem stone jewelry and a wealth of Celtic-inspired pieces, including rings and pendants.
“Metaphysics is my passion,” said Kathryn Brown, the shop’s owner, who regularly works with customers to track down the most unusual and esoteric items.
Interestingly, the eco-friendly name of the shop is reflected in its business practices. For starters, Brown is always looking for way to recycle and re-use materials. “If we do use packing peanuts on our shipments,” she said, “they have not been purchased. We are re-using the clean packaging that has been used on our incoming orders.” She also asks customers to do the same.
Any paper being printed in house also contains post-consumer recycled materials. “We recycle cardboard, glass, paper and anything else we can get our hands on that stops it from hitting the land fill,” she said. Six years ago the shop started using a compost bin, and any scrap metal, steel and iron from the workshop is collected and taken to be recycled.
Brown is also interested in charity work. “Over the years we have been able to give a portion back to our community and a little further afield by donating to a tree rescue project, contributing to the replanting of trees throughout the country after suffering from forest fires and other natural disasters,” she explained. “We have donated to our local animal shelters by donating supplies, dog houses, food and helping cover vet fees for animal operations.” Brown and her team have also sponsored the local FOP by equipping children with back-to-school supplies, creating a positive relationship with the community reinforced by customers who, in turn, patronize the shop.