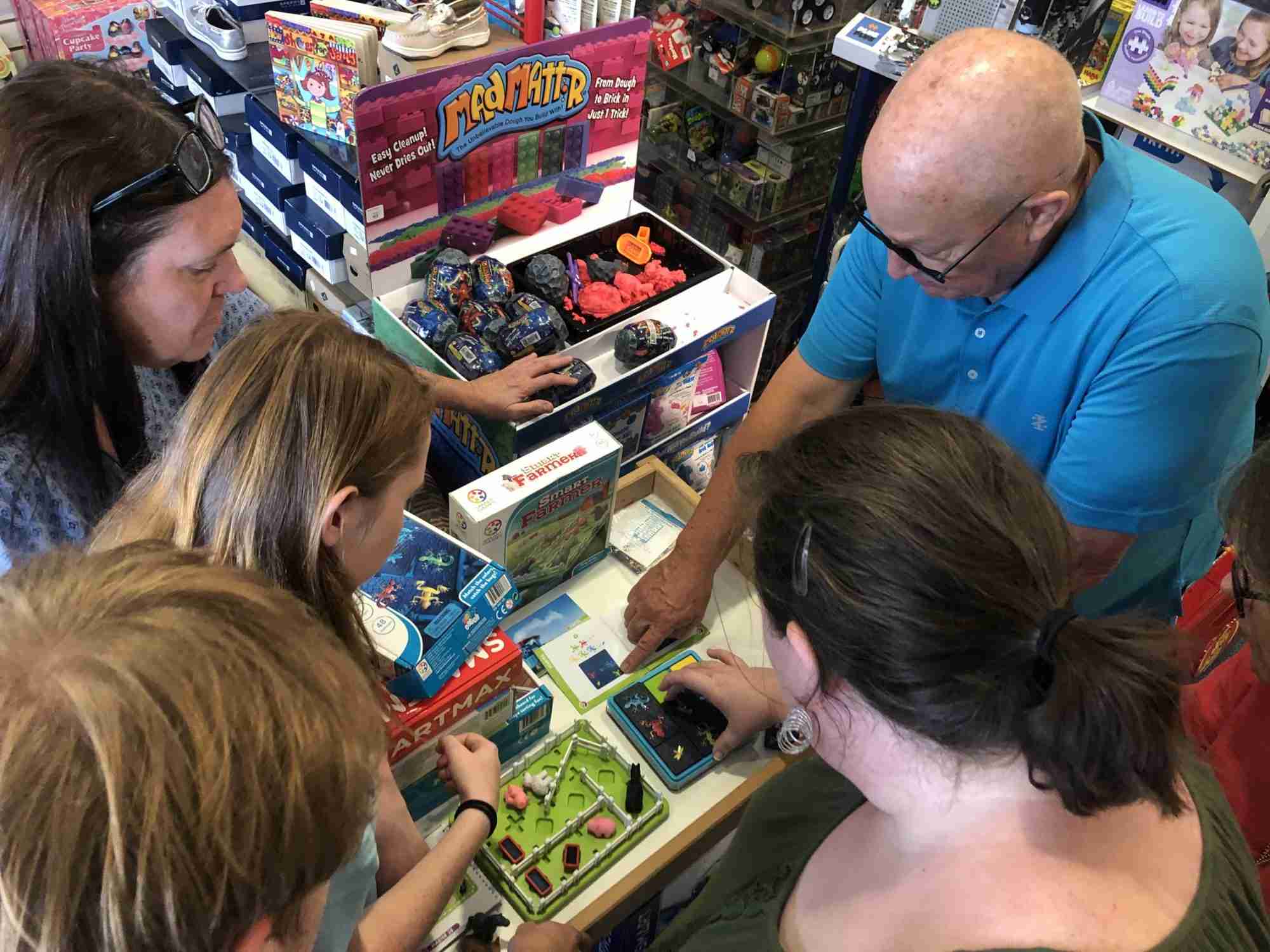 Demand for games and puzzles has surged in 2020. With everyone more or less confined to their homes this year, games and puzzles are a welcome diversion. They’re a nice break from screens and a way to fill unexpected amounts of free time. Perhaps most importantly though, they cause families and individuals to connect. For this article, four independent toy stores described the game and puzzle scene in their various settings. 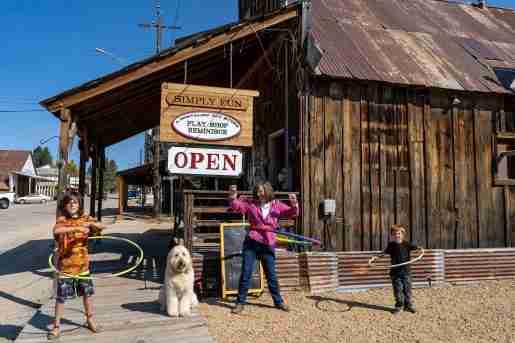 Rhonda Jameson, owner, Simply Fun, Idaho City, Idaho, hula hooping with local children Rowdy and Cody as Mojo the Golden Doodle looks on. The store is located in a foot-traffic-only Historic District that also features piped-in oldies music. “I’m the anti-Walmart and everybody realizes it immediately. You can come in here and get stuff from when you were a kid whether you’re 25 or 90,” Jameson said.

The nostalgia quotient runs high at Simply Fun, an old-fashioned toy store in Idaho City, an historic former mining town in Idaho. “I’m the anti-Walmart and everybody realizes it immediately. You can come in here and get stuff from when you were a kid whether you’re 25 or 90,” said Owner Rhonda Jameson. Indeed, there’s a sign outside her 1,500-square-foot store that bears the motto “Shop, Play, Reminisce.” In the late 1800s, the space was home to a blacksmith, but now nostalgic games like Monopoly, Life, Risk, Clue and Aggravation number among the three dozen or so on display. “I have the original 1959 Risk, for instance. Everything is new but it’s the original packaging and pieces.” Any and all of Simply Fun’s games and puzzles were in demand during the springtime quarantine period. “Because Amazon was sold out! I’m an hour from Boise and people would call inquiring and drive who knows how long to come up here, just to get jigsaw puzzles and board games.”
Jameson recommended displaying games and puzzles face-out. “Every game I have in stock is on a ledge so when people come in, they don’t have to look at a case or shelving. Rows of games are immediately visible.” She’s in the habit of making Facebook videos depicting the jigsaw puzzles and board games she has on hand, a practice that was particularly helpful during the springtime shutdown. Typically, there is a game playing area set up inside Simply Fun (temporarily sidelined due to COVID restrictions) where customers can try out games. “I also have the rules, history and instructions out everywhere items are displayed.” There’s no denying how well the nostalgia factor appeals to adults, but Jameson takes care to never forget her younger audience. “I send YouTube links to kids, so they can see other kids their age demonstrating how to play everything from Cooties to Marbles.” 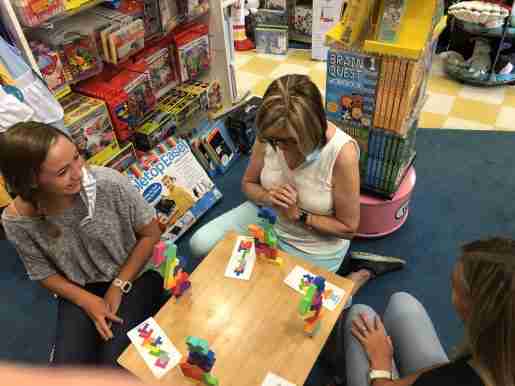 Although Genuine Toy Co. in Plymouth, Mich., carries the usual time-honored games like Life, Clue and Risk – in their original form and with their original packaging – their top sellers are a newer breed. Forbidden Island, Dragonwood, Ticket to Ride, Catan and Carcassonne are favored by customers at the 2,500-square-foot store. “They’re good family games. We consider them to be the new family classics,” said Elle Dare, who co-owns the business with her husband Charles. “I think a lot of people don’t get into them at first because their boxes lack cutesy cartoon covers. People think they’re really strategic and super-intense games, but they’re not. Once they get into them, they realize wow! There’s a whole other world of games out there, other than Monopoly and Sorry.” As for jigsaw puzzles, Genuine Toy Co. does a brisk business in Ravensburger and White Mountain varieties, selling scenic landscape and collage images pretty evenly. Brain teaser games like Rubik’s Cube and Tavern puzzles are also popular. The latter are reproductions of a type of puzzle traditionally forged by blacksmiths. “We do well with those because they’re fairly hard to find.”
Demonstration is the secret behind Genuine Toy Co.’s success at selling games. “It’s how we get a lot of people to try out games they’re not familiar with. When we get a new game in, we either play it ourselves or we look up how it’s played so we can explain it.” The Dares frequently set up game tables in a covered area of the mall where they’re situated. “People stop by and watch games being played or try a round or two. They can see if they like it.” This past spring, the store was preparing to host a Ravensburger-sponsored jigsaw puzzle contest. Teams of up to four were invited to register to see who could complete a 500-piece puzzle in the shortest amount of time. Alas! The pandemic dashed those plans, but it is an idea Genuine Toy Co. plans to revisit in the future. Meanwhile, a plentiful supply of puzzles are always on hand with every effort made to display them face out. The same applies to games. “Games and puzzles all face forward so when somebody takes one down and before we can restock it, you can still see the cover of the one behind it,” Elle Dare concluded.
At The Toy Shop in Florence, S.C., sales of single player games have increased due to the pandemic, according to Owner Brice Elvington. Selections from the Smart Games Line are popular. “Our top seller is always Three Little Piggies. Early in the shutdown, we created demo videos, narrated by my 5-year-old son and 7-year-old son and daughter.  They gained a local following and we even had one customer come in and ask for four of the game she saw my daughter playing to send to her grandkids.” Games like Seek-a-Boo from Mindware and Slam Cup by Blue Orange in some instances sold out the next day following their star turn in a video. Zingo is another winner for the 2,000-square-foot store with many customers buying all four versions. Meanwhile, customers clamored for any jigsaw puzzles they could get their hands on early in the shutdown. Ravensburger continues to be The Toy Shop’s best-selling line with no certain size, age range, or theme standing out.  “We have had lots of customers returning every week for new puzzles. I feel like it’s become an addiction or an escape for a lot of people.” 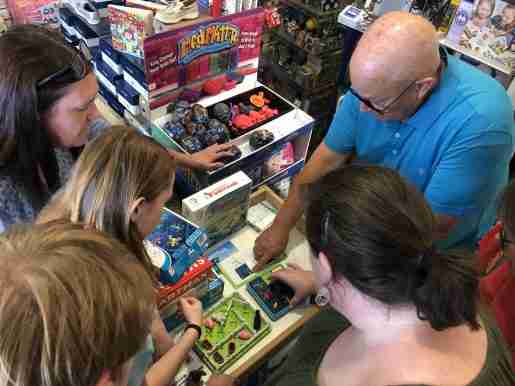 Corey Funkey from Smart Toy & Games visiting The Toy Shop in Florence, S.C., to teach the staff how to play and show customers their new games.

In order to sell more games, Elvington recommended requesting demos from suppliers, playing with the demos, encouraging all employees to do the same and having kids demo them in videos. “I think when customers see a kid not only playing, but explaining a game in a video, it really convinces them of its age appropriateness. A customer can tell when you are trying to sell them something you’ve never played, and they can see it in your face when it’s a game you really like playing.” The Toy Shop takes care to combine games from the same company on its shelves. For instance, they have a large spin rack for all of their Smart Games and display all four versions of Zingo side-by-side. “It gives more credibility to those lines and customers are more likely to return to purchase others if they enjoy the game they buy.”
Jigsaw puzzles are in demand at Adventures in Toys in Birmingham, Mich. “My best-selling brands are Ravensburger, White Mountain and Vermont Christmas Company which also does all year ones, not just Christmas-themed,” said store Owner Doug Lewton. Chalk up their popularity to the slightly older clientele in his area. “A lot of grandparents come in. They like the scenic landscape puzzles and some of the 1950s and 1960s nostalgic ones.” They also like the games he carries by Winning Moves which remakes all the old classics. “I’ve got the original Life game, the original Clue, Chutes and Ladders, Candyland – how they looked when they first came out including all the nice quality pieces. The old Risk, the old Payday – people remember. Even the younger crowd – the 30 and 40-year-olds. I’ve got the games how they were back in the 1970s and 1980s.” Of course, Lewton caters to the present-day children in his customers’ lives. He carries current trendsetters like the Smart Games line which features selections that are not only fun but educational as well. “And ThinkFun! It has a lot of single player games like Rush Hour that are popular right now. Their Zingo is probably the best-selling kids’ game ever.”

Brice Elvington, owner, The Toy Shop. Elvington recommended requesting demos from suppliers and playing with the demos and having kids play with them in videos.

Game demos are on pause during the pandemic at Adventures in Toys, but sampling is essential, even if only by staff. “I tell all my game companies I need a sample. Because we can’t sell a game if we don’t know how to play it. These days we can only explain the games, but we do have to try them first,” said Lewton. His own enthusiasm for jigsaw puzzles is reflected in the brands he carries, and his customers benefit. “I’m very particular because I’ve tried them all. I’m not going to get a puzzle that doesn’t stay together well or has weird shaped pieces. They have to fit together nicely and not have ripped edges.” Display-wise, he recommended always having games and puzzles face front to truly grab customers’ attention.

SGN Asked: Which of the changes you made to your store during the pandemic will be permanent. Why?

Prior to the pandemic, Simply Fun in Idaho City, Idaho, was known for having a wide range of demos on hand. “I probably had four dozen toys and games out to play with at any given time, including a shooting range for rubber band guns and bows and arrows!” said Owner Rhonda Jameson. They’re gone now – masks and hand sanitizers proliferate instead. However, Jameson sincerely hopes neither situation will be permanent!
Genuine Toy Co. in Plymouth, Mich., has plans to maintain curbside service once the pandemic is but a distant memory. “We’ll definitely keep that going,” said Elle Dare, who co-owns the business with her husband Charles. “It’s worked well for us and for our customers. We put pictures of all of our inventory on our Facebook page along with pricing. People shop online, call us, tell us what they want, and we just run it out to them.”
Services such as local deliveries, curbside pickup, surprise bags delivered to families and PayPal invoicing will live on post-pandemic at The Toy Shop in Florence, S.C. “We added these things to make shopping safe and more convenient,” said Owner Brice Elvington. He also plans to maintain partnerships he forged in the community and with some of his game vendors which resulted in over $20,000 worth of educational games and toys being donated to kids who might otherwise not have these items while stuck at home.
Demos have vanished from the floor at Adventures in Toys in Birmingham, Mich., due to the pandemic. “The train table is gone, the Magna-Tiles, games for both kids and adults to try, hands-on baby toys we used to have out on a table. All gone,” said Owner Doug Lewton. One day they’ll be back, he vows, because it helps to see what kids like to play.