Getting Gems Gone
The Sales Picture for Attraction Shops


With novelty of experience and uniqueness of visuals as cornerstones of museums, caverns and other tourism sites, gift shop retailers at these locations capitalize on tapping the moment with stones, gems and jewelry available for sale to visitors. Central to selling the offerings is insight around giving customers a tangible form of the memory of the outing.

Of course, understanding visitor demographics is a critical component of a gift shop’s success. Destinations with heavy traffic from schoolchildren on field trips, for instance, require ample supplies of low-cost merchandise. On the other hand, museums and other destinations with significant traffic from broader swaths of visitors open the prospects for selling higher end items with heftier price tags. 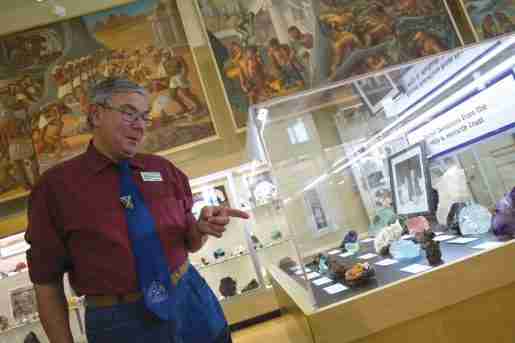 Bruce Gellar, director, Colorado School of Mines Geology Museum. The store sells everything from trivial to high-end items, according to Gellar.

Although the range of site destinations and their visitor demographics varies widely among gift shops, operators find common ground in terms of retail best practices insofar as organizational and display methods are concerned. At the end of the day, the operators said, the gift shop is about giving visitors the opportunity to extend their experience.

When Cathedral Caverns State Park in Woodville, Ala., expanded its gift shop to its current estimated 400 square feet of space, Facility Operator Judy Holderfield used the opportunity to update the displays of gem stones, jewelry and the wide assortment of goods sold there.

Most significant in the display updates, said Holderfield, is reducing the shop’s reliance on display cases where merchandise sat behind glass and required a store associate’s assistance to get a closer look.

“They want to touch and feel” the items, Holderfield said of the store visitors, a good portion of which are kids on field trips. Items sell so much better, she said, when customers are given open access to the merchandise.

A view of the displays in the store at the American Museum of Natural History in New York. Lighting is a key element to selling gems and minerals, the assistant director of retail operations said.

For her young customers, Holderfield keeps the store stocked with a good supply of the popular polished gemstones of the variety found in the caverns. She sells them as individual pieces and also inlaid into jewelry.

The aesthetic appeal of the gems draws natural attention from shoppers in the store, inviting hands to hold and caress the curves and crevices of the formations. And with mindfulness on price points, Holderfield said, virtually everyone leaves with a piece of the cavern.

“Kids love rocks,” she said. Even if the young ones come to the store with only $2 in their pocket, “they’re not going home with any money.”

Among the shop’s top sellers is “popcorn rock.” With the item, which Kaufman said is often purchased by teachers for purposes of classroom science experiments, kids add white distilled vinegar to create their own crystals. 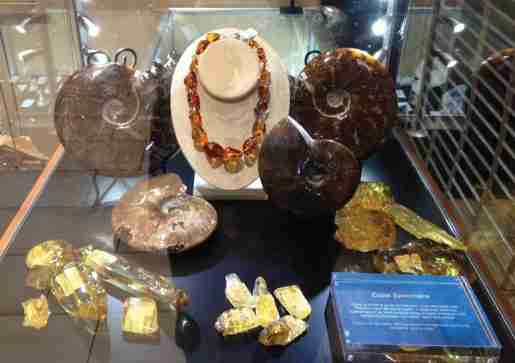 A good portion of store sales are from jewelry at the American Museum of Natural History, according to the assistant director of retail operations.

Other popular items sold in the store, which he estimates at around 1,200 square feet of space, include two-centimeter soapstone carved animals, amethyst and a variety of gemstones as well as onyx and thin agate slabs.

In terms of the store setup, Kaufman said he arranges the store to accommodate eye levels with multiple shelf units. On lower units that catch the eyes of children, he keeps non-breakable items with lower price points. Mid-tier and top shelf units carry higher-priced items that are more likely to catch the attention of parents and other adults who may carry more money in their wallets.
“We don’t mix the gift shop too much,” Kaufman said, speaking about the need to offer a wide variety of items for sale. “Wherever they go, they’re looking at something different.”

Although Kaufman is a strong believer in giving customers access to merchandise, he’s also a realist in terms of the potential for visitors to damage product sold in the store. In an effort to head off problems, he said, he relies heavily on signs around the store as reminders that most times it’s better to look without touching. “Beautiful to look at and beautiful to hold, but if you break it, consider it sold,” he recited as one of his favorites.

Steward of Appalachian Caverns in Blountville, Tenn., Roger Hartley, concurred on the importance of the aesthetic appeal of merchandise.

Describing his store with 1,800 square feet of space as “the largest rock shop in East Tennessee,” Hartley said, “We do the mixed polished stones. Just because they’re shiny, that’s the most popular thing we have.”

Still, Hartley said offering a range of products is crucial to maintaining a rapid sales clip, though he doesn’t disclose store revenues, saying the store is a “mom and pop shop.”

“We’re pretty laid back,” he said. Most of the merchandise, he said, is “out where they can hold and touch.” Only breakable items are put behind glass doors. “Accessibility. That’s the best bet for us.”

At the American Museum of Natural History in New York, Karen Newitts, assistant director of retail operations, emphasized product presentation and product knowledge as key elements of the shop’s success. Most recently, the store logged $11.5 million in retail sales, and the store is on track to reach the $12 million mark at the end of its fiscal year on June 30.

A good portion of the store’s volume can be attributed to sales of the store’s jewelry, much of which is displayed in 2-foot-by-2-foot or 30-inch-by-30-inch glass cases. With each, Newitts said, “lighting is key,” emphasizing the importance of light where gems and minerals are concerned.

Beyond displaying the full glory of jewelry to visitors with ample lighting, however, Newitts said the store also emphasizes nature’s role in making the items that are for sale. For example, Helenite jewelry is displayed high in the back of the case and then pyramids down and is housed with raw, unrefined ash from Mt. St. Helens that was supplied by the vendor. In the same way, an amethyst necklace sits in display next to an amethyst cathedral.

The approach, Newitts said, aligns with the museum’s mission of promoting science and education. “We try to bring in geology and relate pieces back to the museum.”

The store, which includes two locations, was recently remodeled. The main location, which includes 8,900 square feet of space over three floors, is exceptional in the gift shop arena for its emphasis on high end merchandise. While a good portion of the jewelry retails for less than $50, Newitts doesn’t shy away from offering items costing considerably more, including one piece with a price tag of $1,400.

While Newitts agreed that high-dollar items are not always common in museum gift shop settings, she said customers are willing to make these kinds of “impulse buys” based on the premium experience the museum provides along with the idea that purchases are a way of “giving back.” Still, Newitts underscores the high value of customer service, with associates with deep product knowledge, as critical to sales across the price point board. “It’s really knowing the product and feeling comfortable,” she said.

Another museum focused on science and education is the Colorado School of Mines Geology Museum where Bruce Gellar is director. Taking on the role around a decade ago, Gellar said the gift shop came into being when he supplied post cards to visitors who simply wanted a memento of their visit. Today, the gift shop, which Gellar estimated as occupying 300 to 400 square feet of space, sells items ranging from “the very trivial to the very high end.”

Top-selling items at the store tend toward a “buyer-oriented bias,” said Gellar. In the summer, perfume-bottle-shaped gold vials filled with gold and silver tend to sell by the dozen, Gellar said.

While Gellar did not give the shop’s annual sales figure, he said his goal is to support two part-time collectors working for the store, an aim that he achieved last year and is on track to continue meeting for the foreseeable future.

Gellar described the museum itself as unique in the space and that the organization has found itself in a fortunate position as recipient of many gifts. The downside, he said, is that many items are warehoused because of a lack of room for display.
“It’s a good problem to have,” he said.