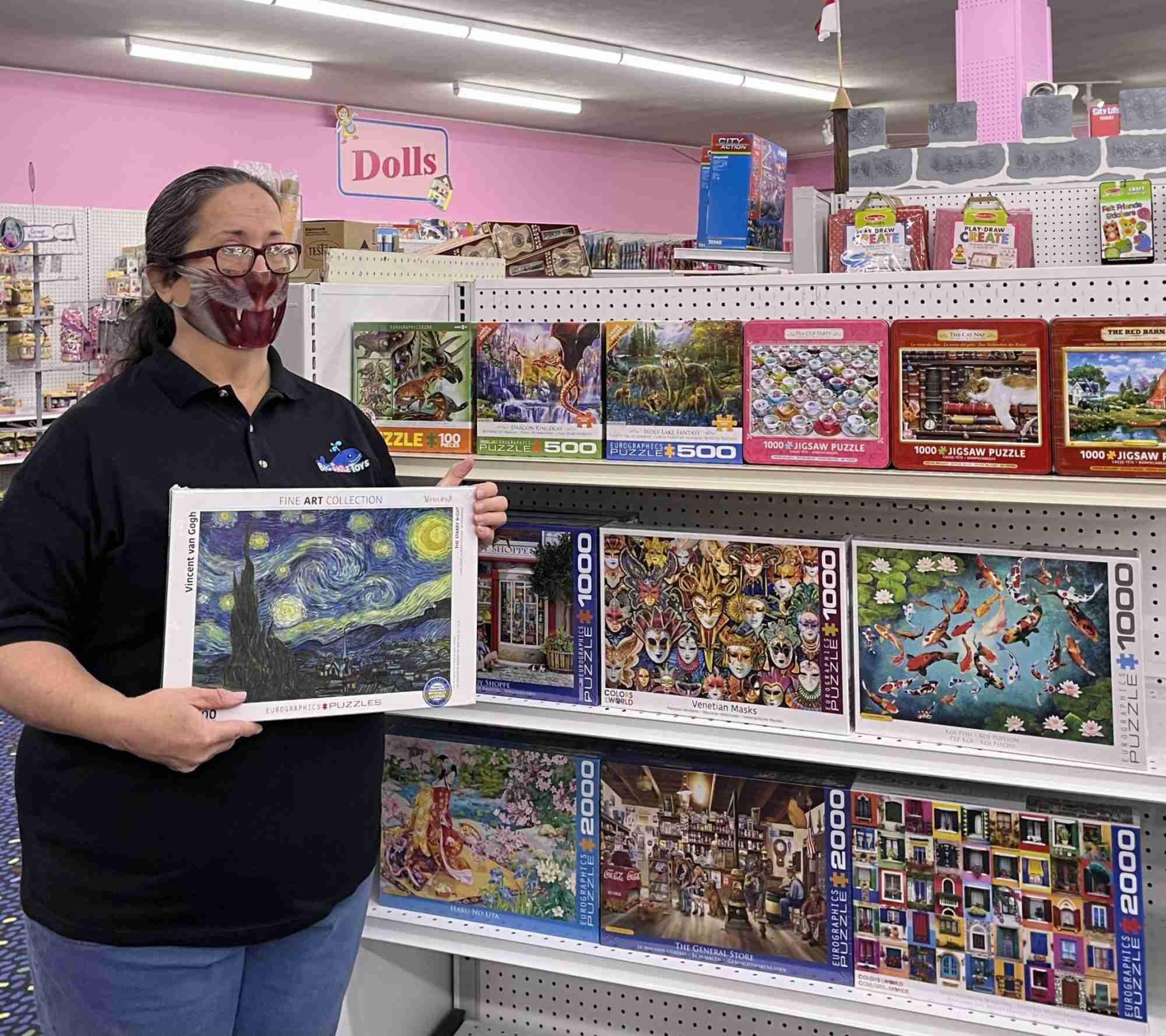 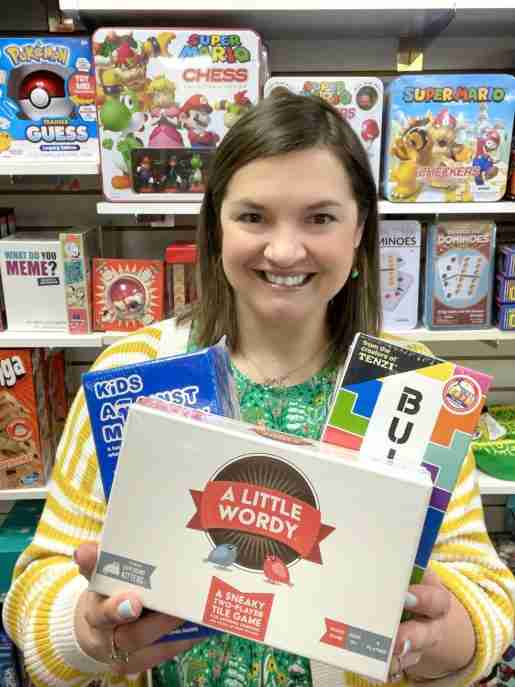 Games and puzzles are standard fixtures on toy store shelves, but they are also available in some non-traditional niche retailers—namely, hardware stores and pharmacies. In interviews for this article, these merchants said stocking items like games, puzzles, and other toys are part of meeting customers’ needs—although they come in for the core service, patrons are often pleasantly surprised at the other items they find in the store.
Diversifying is the key to long-term success. “Most of the time, even if you are ‘just’ a hardware store, you have to bring people in for something else,” said Wendy Morgan, CFO of two Coast Hardware stores in Willits and Fort Bragg, Calif., and a third store that exclusively sells hardware. “To me, retail is a very difficult business to be in these days, especially those with brick-and-mortar locations. In small towns, you have to have something to keep people’s interest. We have other hardware stores in the area—Fort Bragg alone has four. If you don’t figure out another reason to bring people into your store, someone will be out of business. There’s not enough room for just a hardware store. I’m always looking for new things to feature.” 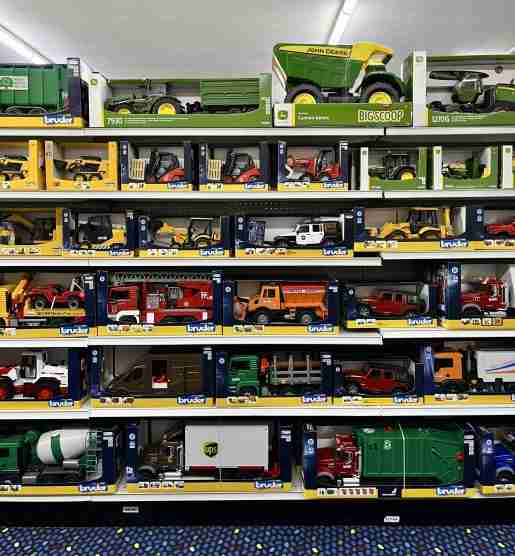 Construction toys at Big Smile Toys at The Hardware Center. The majority of the toy department’s clientele are grandparents and young families who remember and love classic games, according to the toy manager.

Isabel Danielak, manager/buyer at Silverton Pharmacy and Gift Shop in Toms River, N.J., said games and puzzles have been part of the store’s inventory throughout its long history. “We sell a lot of Masterpiece and Springbox puzzles. In games our big sellers are the classics—Monopoly, Clue, Perfection, Trouble. Games have always been good sellers for us, but we’ve noticed an increase in the last few years. With fewer big box stores around us, there are fewer places to get them, so [customers] come here. People are spending more time with family. Even when they are going somewhere with family, they’re taking a game with them,” she explained. 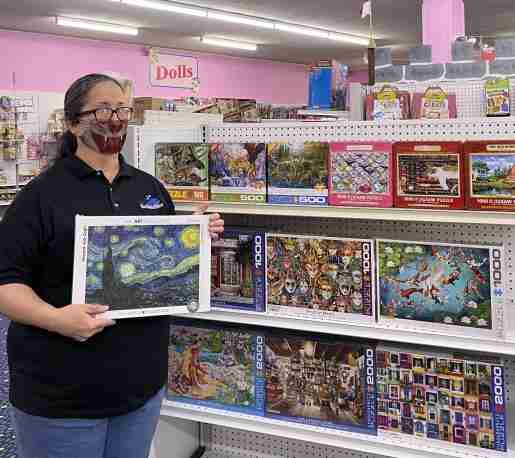 Stevie Tagye, sales associate, photographed with puzzles at
Big Smile Toys at The Hardware Center in Paoli, Pa. Rather than stock a few shelves’ or an aisle’s worth of playthings, the store offers an entire department of toys.

Games and puzzles continue to bring in strong sales at full-service toy stores, as well. At Island Treasure Toys, with its flagship store in Freeport, Maine, and three additional locations in Kennebunkport, Bath, and Yarmouth, Maine, the top-selling games are “Throw, Throw Burrito, and a new one called Kids Against Maturity, which is kind of a kid-friendly version of Cards Against Humanity. Pokemon, and the Simon guessing game. [Also] Catch the Snitch from Spin Master and [classics like] Scrabble,” according to owner/buyer Emily Drappi. “Puzzles are still popular—they were really strong in 2020, then it kind of cooled off in 2021. This year so far, we’ve had a strong puzzle season. Our big sellers in puzzles are Ravensburger and some more ‘brain teaser’-type puzzles. And Rubik’s Cube—we could not keep them in stock.” 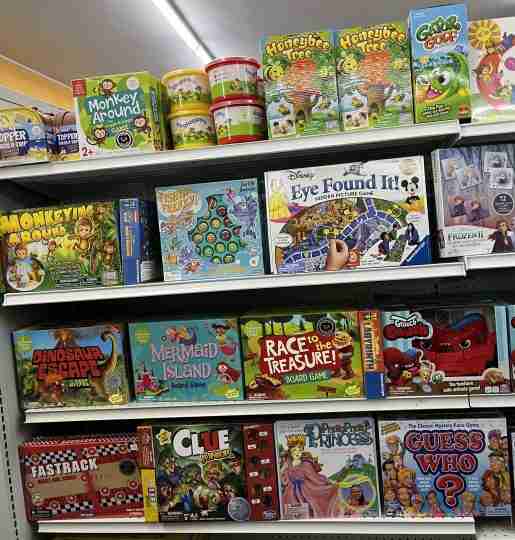 A game display at Big Smile Toys at The Hardware Center. The toy manager said the store’s number one line in puzzles is Ravensburger.

Games and puzzles are popular at World of Toys in Berlin, Md., but there are plenty of other items available to tempt customers in their 4,800-square-foot location. “We have over 15,000 items in the store,” explained Owner Olga Kozhevnikova. “In games, our big sellers are Taco Cat Goat Cheese pizza, a popular card game for ages 8-plus. Lots of games for older kids—Katamino Family, a logic game. For teenagers and adults, Ticket to Ride, Catan, Thames and Kozmos escape room games [sold well].” In puzzles, Kozhevnikova said, “We carry name brands like Ravensburger, White Mountain, Cobble Hill. We have ones starting at 25 pieces and up to 2,000 pieces. We have a puzzle line by University Games. They’re mystery puzzles with eight titles. You read the little 10-page story, then put the puzzle together—you have no idea what the picture looks like [until it’s finished]. They’re very popular.” She adds, “Games and puzzles are selling so well because kids are spending a lot of time with electronics, and parents want to get them away from them. And a lot of older people do puzzles to stay occupied. When I have free time, I do them myself. My daughter will do the puzzle with me, but on her own, she wouldn’t. They’re a way to bring families together. Last year was our best year ever. We have a great selection. The games and puzzles we carry—you wouldn’t be able to find them in the stores around us. Customers take advice from us before making their purchase.”
At Coast Hardware, Morgan said she’s found that puzzle sales are seasonal. “For instance, around the holidays, Christmas scenes sell. In the spring, it’s pastels—lighter colors, brighter colors. Your tried-and-true sellers will be anything with animals. We also sell complicated puzzles, when everything is the same color, or there are just a few colors. I’ve sold puzzles for a decade or so—they turn pretty consistently. The last few years, the sales were out of control, but people were at home, and there’s only so much TV you can watch or Internet you can look at.” Morgan is in a rural area of northern California, near the Oregon border, and said she has a large clientele of traveling nurses who work for the various hospitals and clinics in the area. “I have a good clientele there, because they’ll come out and stay for a month or so, and it’s something to do when they’re off,” she explains. Morgan carries a variety of indoor and outdoor games, noting they are also seasonal—“When it’s raining or the weather is bad, people will buy more Jenga and the indoor games. We also sell outside stuff—cornhole, balls, horseshoes. It’s not unusual for game sales to be seasonal.”
Rather than stock a few shelves’ or an aisle’s worth of toys, Big Smile Toys at The Hardware Center in Paoli, Pa., is an entire department which has been a fixture in the community for many years. Games and puzzles remain strong sellers in the toy category. Toy Manager Bebe Feimster said, “Our number one line in puzzles is Ravensburger; best sellers are 500- and 1,000-piece puzzles. They sell well because puzzlers love the quality and images from Ravensburger, and the puzzles are made in Germany.” In games, Feimster said, “We sell a great deal of classic games such as Candy Land, Sorry and Rummikub, just to name a few. The majority of our clientele are grandparents and young families who remember and love those classic games!” 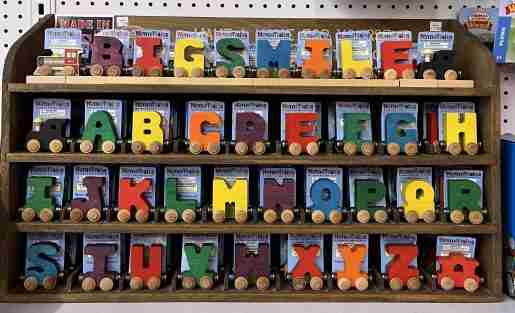 Colorful Name Train toys at Big Smile Toys at The Hardware Center. The store’s toy department has become a fixture in the community.

Retailers rely largely on their sales reps and attending annual trade shows (both in-person and virtually) to keep up with trends in the game and puzzle categories. Kozhevnikova said she works with over 100 different vendors; she and Drappi are also members of the Good Toy Group, a buying collective of toy store owners. Drappi said the group has been helpful when it comes to learning about the latest and greatest toys of all kinds: “They help find new products for us. That’s how we learned about Kids Against Maturity. I also find out about a lot of games from our customers, and I’ll order them because of their interest.” Drappi is seeing single-player game sales increase. “Some parents are working or trying to get kids off screens, so they seem to be trending a bit,” she said.
Displaying games and puzzles can be a challenge because of limited space versus the size of the items’ boxes. At Silverton Pharmacy, Danielak said puzzles are on a spinner rack and games are on the store shelves in their 8,000-square-foot space. Feimster said at Big Smile Toys, “we find that if you have the space, it is best to face the boxes out, rather than having them on the shelf showing the box sides. We display games by age, which makes it easy for customers to find an appropriate choice. Puzzles are displayed by piece number.”
Kozhevnikova said, “Customers can see every title. We rarely have boxes facing sideways. On every puzzle, you can see the picture. We have a big aisle of kids’ puzzles that go from older to younger kids. We have a table in the store where we’ll put out new games so customers can play. We can explain the game, they can play it. We have around 30 titles on the game tables. We change them up now and then. Certain games stay on the table, others we switch around. This year, a lot of companies raised their prices. We have to watch. We trying very hard to find discounts to keep prices low for customers.”

Drappi said games and puzzles each have their own section in Island Treasure Toys’ 3,000-square-foot flagship store. “Nothing too creative [in merchandising] at the moment. Before the pandemic we had a big table in the game section—we had a lot of games out for people to demo. It’s much harder to demonstrate how games work when they’re in the box. Right now we do more explaining than showing.” She said they used to have a Team Game Night for the team members at all four of their locations to bond and try out new games.
Morgan said, “I am a hardware store, so everything is on shelves. You have to keep it looking full, fresh, and always changing. When it gets stagnant, you’re stuck with what you have. Over the last few years, it would get stagnant because I just couldn’t get things in. We had to work with what we had. We would keep rotating them and moving them around. Customers understood.”
As niche retailers continue to explore new offerings and toy stores evolve their inventory to meet customers’ requests and stay current with trends, games and puzzles will likely remain popular with children and adults alike.

← Getting Kids Loving to Learn - Toy Trends at Baby Stores Plush and Toys at Toy Stores - Whether New or Classic, Toys Are Selling →