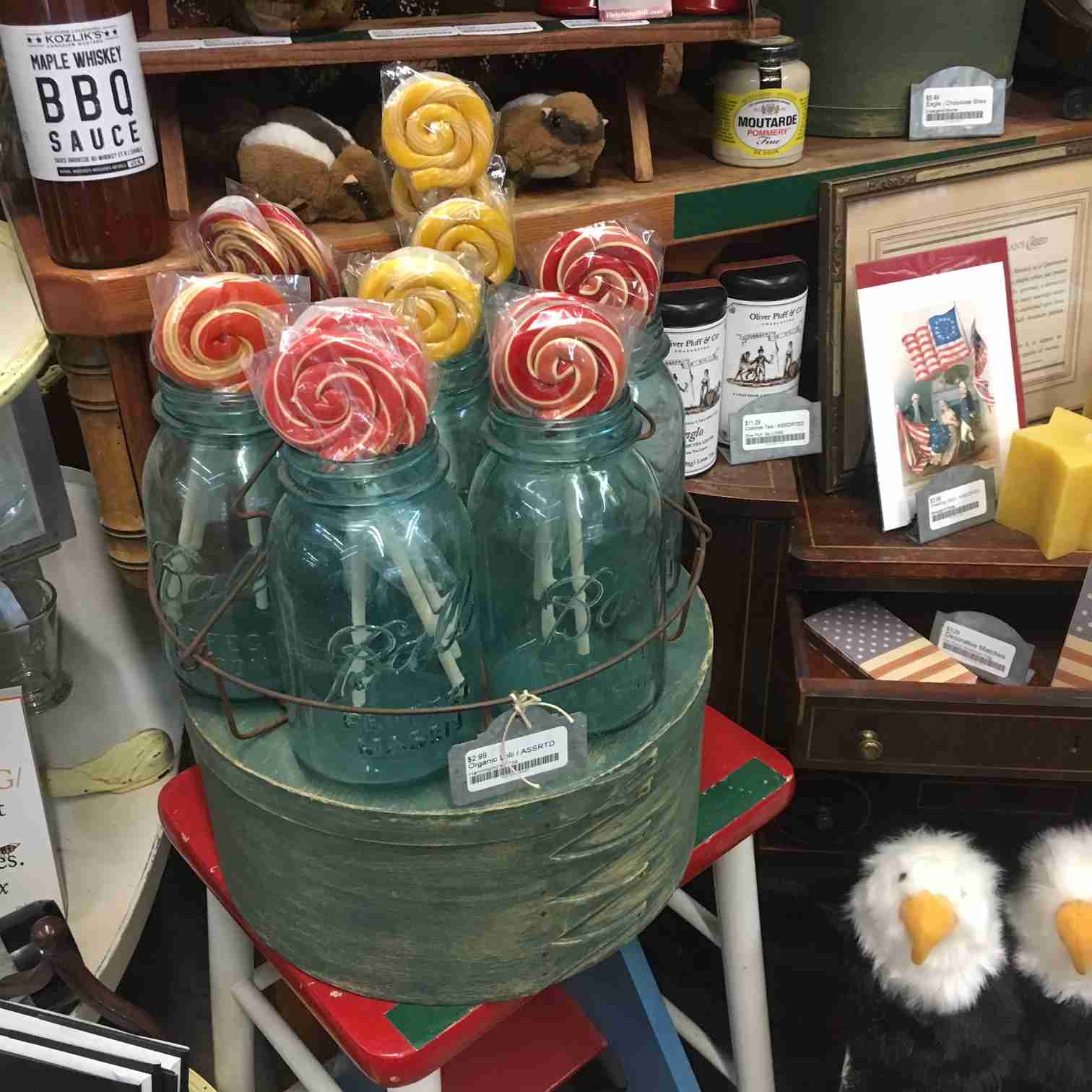 What are the top sellers for general stores in the candy and snack departments? For this article, three owners of general stores shared their best-selling items and how they keep their inventory fresh. 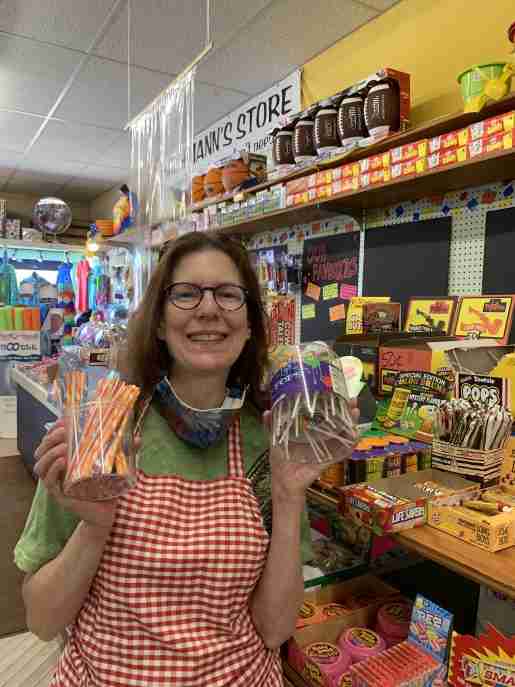 Third-generation Owner Michelle Fox of Bachmann’s Store in Central Lake, Mich., loves the joy nostalgic candy brings to her customers. Knowing the history of the candy she sells is just one way she shares the store’s passion for candy. The business, one of the few remaining five-and-dime stores, has kept the candy presentation largely unchanged since 1942.

Michelle B. Fox described herself as the third-generation proprietor of Bachmann’s Store located in Central Lake, Mich. “My grandparents started the store in 1942 and retired in the early 1970s. My Uncle Mike and his wife took over and retired in 2011. Neither one of their children wanted to take over and I was getting ready to retire from a career as a teacher. I bought the store so they could retire and we could continue on for a third generation. It’s been fun,” she said.
“Candy cigarettes are a top seller although they are called candy sticks now. People buy them by the case. It’s a consistent year-round seller.” Fox said that kids also love Nik-L-Nips, the wax bottles filled with syrup which used to sell for a nickel.
“Keeping inventory fresh can be an issue with candy,” Fox explained. “We were non-essential and closed from March until early June. I lost a lot of candy that was out of date.” She said she donates out-of-date candy and snacks to a food bank. Fox said she tries to sell down her inventory in fall before the winter arrives.
“While we were closed, we did do curbside and delivery. We still do that for customers who feel unsafe leaving the house or getting out and about. I was glad we were still able to help people even though our doors were closed.” 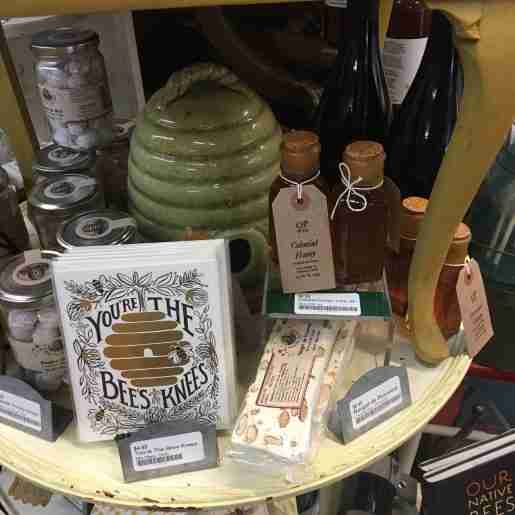 A bee-themed display at Bear Foods Natural Market and Café-Crêperie. The store created a drive-thru in the alley behind the business with limited hours but has also remained fully open.

Fox said they have two hours everyday where people can make an appointment online and shop by themselves. “That’s a change that probably will stay for some time.” She said that people can reserve the entire store. She also requires everyone to wear masks because it’s an executive order from the governor. Fox said they have signs that say “You have to wear your shirt, your shoes and masks.” She explained that not all stores require face masks and she believes it’s confusing to people to have some businesses follow the face mask rule while others do not.
Other changes Fox has incorporated include cleaning. “Two hours every day before we open to the public, we do deep cleaning. It’s difficult because I don’t want to overload the store with chemicals. We use rubbing alcohol and things that evaporate. We pay lots of attention to surfaces and we encourage customers not to to touch, which is hard because a lot of the fun of a candy and toy store is touching things. We encourage them not to touch unless they’re sure they are going to buy. We sanitize things we see are picked up.” 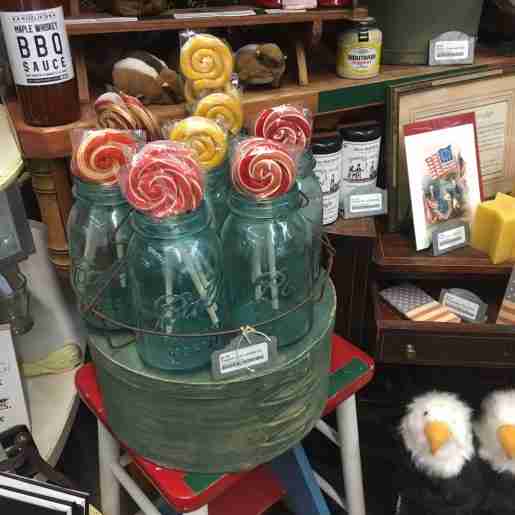 Candy, edible gifts and other merchandise at Bear Foods Natural Market and Café-Crêperie in Chelan, Wash. Hiring employees has become a challenge for the store.

Teresa Farrell-Pascoe owns Bear Foods Natural Market and Café-Crêperie with her husband Nick in Chelan, Wash. which is a town on the shores of Lake Chelan 160 miles east of Seattle. Lake Chelan is a summer resort area where tourists flock to enjoy the lake and sunshine. The 5,000-square-foot store is a specialty grocery store with quality food products such as organic produce, artisan cheese, local beef and pork, gluten-free foods and vegan items. They also carry wine, beer, health and well-being products as well as gifts.
“We have a very large array of chocolates from around the world, for which we are known. Folks love to shop our chocolate collection. Chocolate always makes for a great gift. So do teas,” she added. 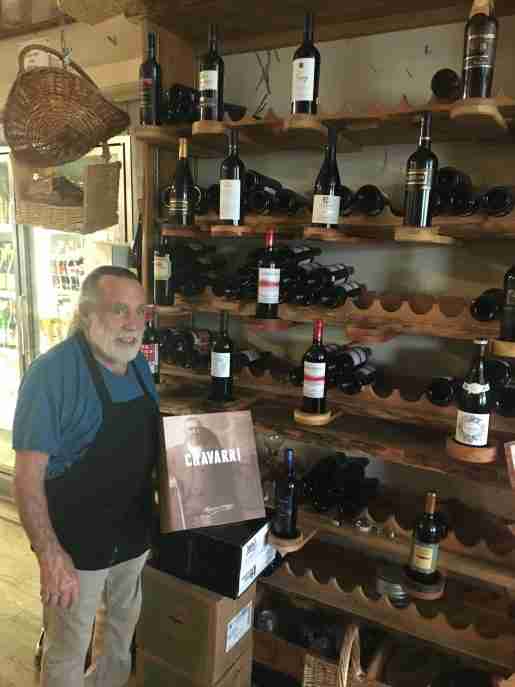 As for fresh inventory, Farrell-Pascoe said they like to go to the expos and find new things to update their inventory. One of her favorites is Expo West in March in Anaheim, Calif. “It is a great place to scout new and upcoming items.”
She explained, “It is too early to determine what permanent changes we will make due to the coronavirus, but finding employees for us and other small businesses in our community is becoming a challenge. We cannot compete with the benefits that unemployment is offering.” Farrell-Pascoe said they have been open throughout COVID-19. “We are a grocery store and therefore are an essential business. We have been disinfecting and it is now mandatory to wear masks. We created a drive-thru, in the alley behind our store, with limited hours, but access to our store has remained fully open to the public for normal business hours.
Teresa and Nick added a café to complement the store to provide a unique dining experience. Teresa decided on a crêperie and Nick developed an allergy-free batter that is savory and nutritious and free from wheat, milk and eggs. They also sell carrot, fennel and red beet juices in their café. 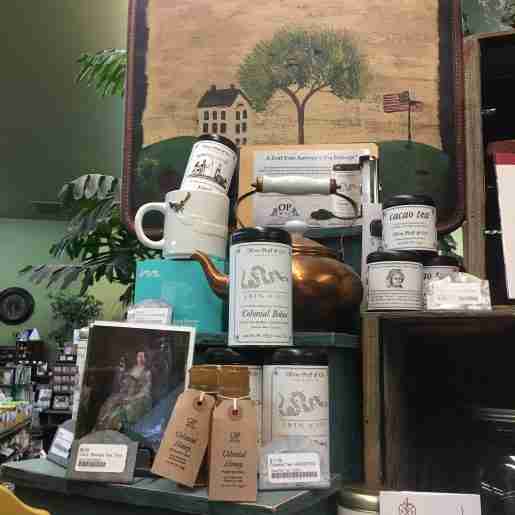 A display of teas with a colonial theme at Bear Foods Natural Market and Café-Crêperie. Teas and chocolates are popular gifts for the store.

Chip Lorenger, owner of the Horton Bay General Store in Boyne City, Mich., has a unique business in a building that is 144 years old and is mentioned in two books by Ernest Hemingway. Hemingway spent a great amount of time on nearby Wallon Lake, but came to prefer Horton Bay. According to Lorenger, Hemingway returned after World War I and was married in the church which was next door to the store, but no longer exists.
“It’s strictly a seasonal business because we’re an extremely busy tourist area for the summer. We’ve restored the building back to the time period when it was built,” Lorenger said. The total square footage of the general store is 800 square feet and he added a 300-square-foot tavern in the back as well as a two-unit Victorian bed and breakfast upstairs. 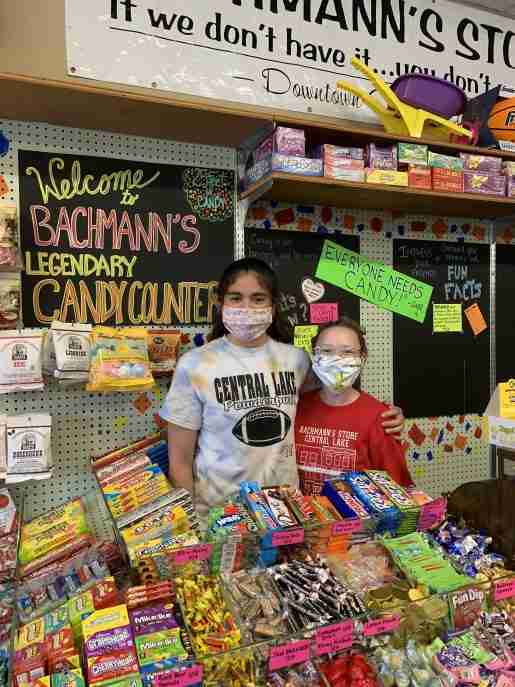 Sydney Fernandez, associate candy manager, and Ally Hatfield, vice president of North American Operations, are instrumental in keeping Bachmann’s Store the candy-counter shopping experience that customers have enjoyed since 1942. They focus on using classic and novelty candy to build excitement with nostalgia. Knowing a little bit about every kind of candy is a job expectation Sydney and Ally take very seriously.

“We have a deli counter and a soda fountain,” Lorenger said. “We sell high-end wine, some gift items and we have an off-premise liquor license. We have a tavern in the back, but because of COVID-19, we seat only 35 per night, by reservation only. We have a five-star rating with Yelp for our tavern.” He serves tapas made from fresh ingredients at his tavern several nights a week in the summer.
Lorenger said that they sell candy and snacks and his top sellers are candy bars and Annie B’s caramels. “Ice cream is a big seller too as well as chips and a variety of candies. We give out lollipops to the kids, but don’t charge for that. I do fresh-baked cookies and scones every day plus fresh-baked pies.” 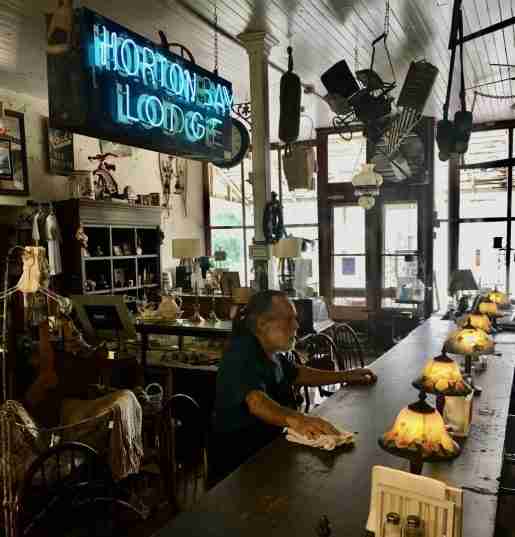 His secret to keeping his inventory fresh is simple: “I keep the inventory low.” He explained, “Because we are so seasonal, we only have a 75-day window to make money. Our season starts July 1 through mid-August. I keep the inventory tight. Plus, I bake everything as fresh as I can make it.”
Because of COVID-19, Lorenger said he does require people to wear masks in his store. “I don’t believe these will be permanent changes. But I do require people to wear masks, maintain six feet of social distancing, and everything is wiped down every hour or two. We need to use caution,” he said.