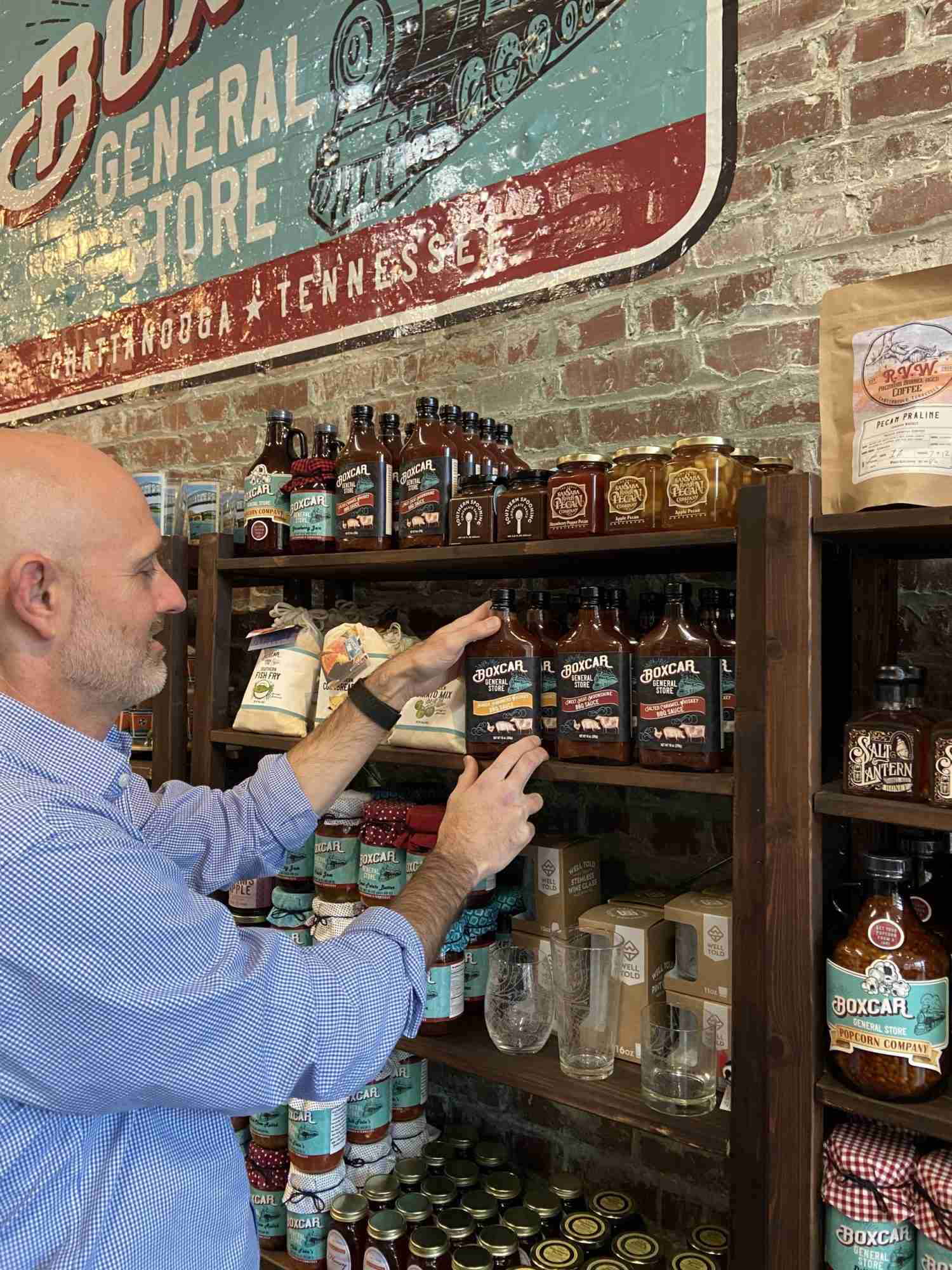 From soup to nuts, country stores have customers covered. For this article, we spoke with five store owners about their best-sellers and sales strategies to keep their country-themed and edible merchandise selling.
Elsah General Store can be found in historic Elsah, Ill. The village, a historic stop for riverboats on the Mississippi River, is a tourist destination and home to 100 residents. The village has preserved its historic character. In fact, said Blair Smith, the store’s owner, the countertops and flooring of the store are original to 1877. 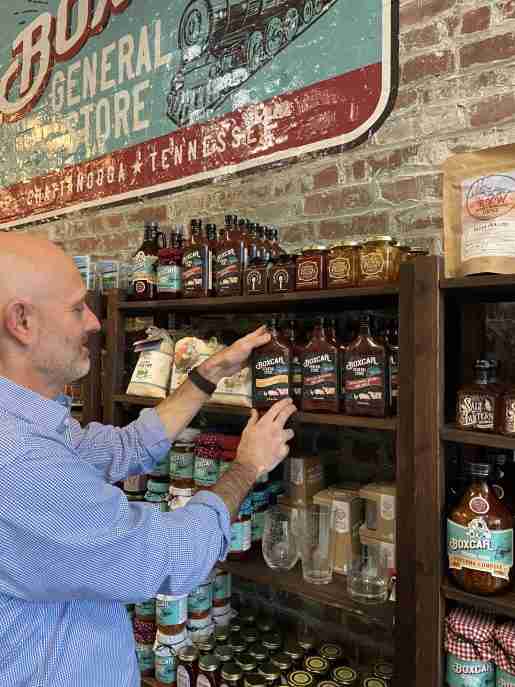 Boxcar General Store Co-Owner Eric Landrum photographed with an edible gifts display. Bread and other food mixes packaged in drawstring bags reminiscent of flour sacks are popular for the business.

Hadley Pottery, featuring Mary Alice Hadley’s distinctive blue primary color and country scenes of pigs, cows and houses are best-sellers for Smith. He sells Hadley Pottery with Christmas designs as well, but said that “by far,” his best-sellers are the dishware depicting the livestock.
Smith stocks some of his edible selection with merchandise not easily procured in the area. Some very popular products come from Cherry Republic in Glen Abor, Mich. “Their cherry salsa, jams, and chocolate-covered cherries make excellent gifts,” Smith said.
Local edible gifts are also strong sellers.
These include specialty foods and treats from nearby St. Louis. For instance, Smith carries gooey butter cake from McArthur’s Bakery or Ann & Allen Bakers of St. Louis. The cake, indigenous to the area, was created accidently when a baker reversed the proportions of flour and sugar in the recipe. 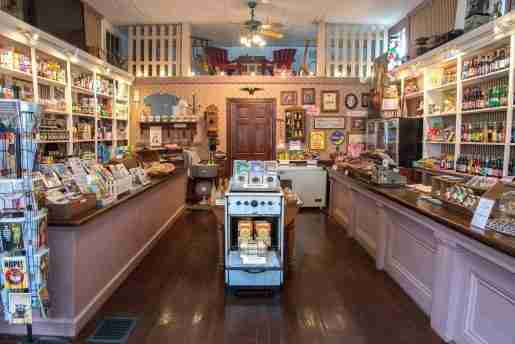 A view of the sales floor at Elsah General Store. The flooring and countertops at the establishment are
original to 1877.

Another local favorite is Ella & Ollie Popcorn.  “It’s an heirloom variety (never been hybridized), grown on land that has been farmed by the same family for seven generations, pops up to a large, fluffy, white popcorn, and is sold in glass jars or burlap gift bags,” Smith said.
It’s important to curate an attractive display to sell more merchandise, Smith said. Smith also pointed out that each item on display has a story–“a unique reason why it’s on the shelves of an old general store.”
“Being willing to engage customers in conversation, and share some interesting information about each item, adds value and makes the purchase and the whole shopping experience feel a little more special,” Smith said.
Top of Texas Country Store, is located in Texline, Texas, a town roughly 500 residents strong. Megan Nightingale, owner of the approximately 1,100-square-foot store (with 300-square-feet of bakery/kitchen), said travelers from several hours away often pop by to shop as well.
Best-selling country themed items at the shop include larger items like windchimes and musical clocks and smaller items like punched tin wax warmers, nightlights, and Milkhouse Candle Co., which carries candles in old-fashioned cream and butter jars (and melts, too). Purses and tote bags fashioned from cowhide leather and recycled canvas sell very well, too. In the five years the shop has been open, the trending colors in country giftware have migrated from maroon and navy to creams, burlap, and buffalo plaid. 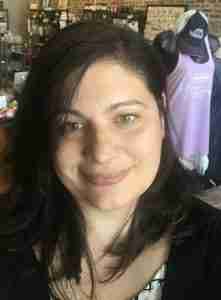 Around Christmastime, Nightingale fields multiple requests for the fresh candies she carries (including peach rings, or chocolate covered coffee beans, which she stocks in milk and dark chocolate, and a mix of milk, dark and white chocolate). Customers want them for stocking stuffers, and as gifts for all ages. Nightingale’s strategy to getting fresher candies in store? She buys them in bulk (ie. not individually packaged) so that there is less processing involved, and the candies are still fresh when they arrive.
To boost sales, Nightingale likes to display items so customers can visualize the merchandise in their homes. She changes her displays roughly once a month, placing new items in the center of the display. And when a customer purchases an item, she fills that empty spot.
“People don’t like empty places,” said Nightingale. “The more things you have, the more likely they are to pick up something.”
The Flying Pig Mercantile is based in the nearby city of Dalhart, Texas. Owner Lacynda Hunter started the shop in her barndominium and then moved it into downtown Dalhart (where the store portion is approximately 5,600 square feet). Soon after, they purchased the coffee shop next door as well. They live in a small town (about 8,000 people live in the town, and 14,000 in the area) with other gift and general/country stores in the area. So, her strategy has been to purchase merchandise to complement–and not compete–with her competitors’ merchandise.
Their sales figures have been growing since 2018. At the end of 2018, the figure was $75,000, at the end of 2019, it grew to $150,000. This year, they’ve already sold $150,000. The coffee shop has brought in a phenomenal amount of travelers to the store, Hunter said.
Hunter said some of her most successful country-themed products include cutting boards and glasses, etched with pictures of pigs, cows, and pewter serving pieces decorated with deer heads.
When it comes to edible merchandise, Hammond’s candies are great sellers, as are The Great San Saba River-branded products, including their popcorn, jellies and pecan pie in a jar. Locally grown tortilla chips have also been strong sellers. The chips come in three flavors–blue, multigrain and chili lime. Offering taste tests–while remaining COVID-conscious–works like a charm to sell edible gifts.
“Once people touch it, taste it, feel it, smell it, they’re sold,” Hunter said. 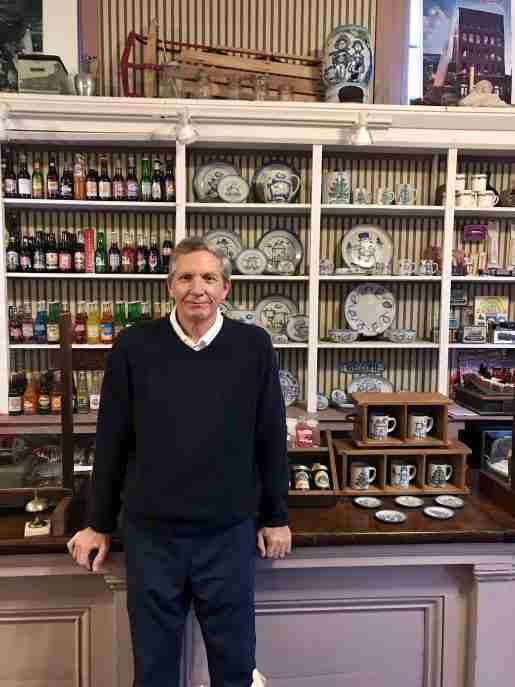 Blair Smith, owner of Elsah General Store in Elsah, Ill. Smith stocks edible gifts that are not easily purchased in the area.

Hunter has found social media to be a valuable tool sales tool. For instance, Hunter’s daughter posted a video of herself making the pecan pie in a jar on Instagram. She demonstrated the steps needed to make it, and how it turned out. This was a very successful promotion, Hunter said.
In Cumberland, R.I., Pine Swamp Place Owner Arlene Laboissonniere has been in the business for 25 years. Twenty-five years ago, country giftware was huge, said Laboissonniere. Then, there was a slump in popularity. It picked up again at around the time Chip and Joanna Gaines started their Magnolia brand, Laboissonniere said. This comeback introduced more of a farmhouse style for a new generation– a little cleaner looking than earlier country styles. This trend brought back home décor items, rustic and warm styles, wreathes and repurposed and distressed items. The red truck is currently a very trendy motif. It’s on everything right now, Laboissonniere said.
In Laboissonniere’s 1,400-square-foot shop, dips such as: artichoke and spinach, cranberry and walnut dip and Vidalia onion relish are hot sellers all year.
At Christmastime, they sell sweet and savory items in baskets, like snickerdoodles, popcorn, chocolate covered pretzels, and so on. These baskets are merchandised with different price points so customers can walk in and select a basket based on price point.
Danielle Landrum, owner at Boxcar General Store in Chattanooga, Tenn., said their best-sellers are Southern-inspired. That includes items from stickers to tea towels to apparel featuring Southern sayings. “Items featuring Dolly Parton, Johnny Cash and Willie Nelson always do well for us,” Landrum said. 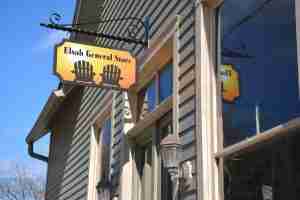 An exterior view of Elsah General Store. The owner said it is important to curate attractive displays, and that each item in the store
has a story.

They’ve also noted that products in vintage inspired packaging are trending. “[Customers] like to see a new twist on a classic favorite,” explained Landrum. Bread and other food mixes packaged in drawstring bags reminiscent of an old-fashioned flour bag are popular picks at Boxcar. Pie-in-jar products are also a favorite, Landrum said.
Landrum is always very mindful of keeping an eye out for great packaging while buying for the store. She recommended selling beautifully arranged gift sets of edibles.
“It’s a great way to increase your ticket average and customers love to purchase them,” Landrum said.