Go team! And hooray for school spirit! When it comes to college and sports fan store sales of licensed apparel and fashion accessories – including hats, scarves and socks – top-selling merchandise is varied and exciting.

At the University of Oregon Duck Store in Eugene, Ore., Chief Merchandising Officer Brian Wright said T-shirts are hands-down his most popular licensed apparel piece. “Everyone likes them, men, women, kids. Out of that mix, I would say kids’ T’s are probably the strongest right now. Ducks jerseys for all ages are popular, too. There is also a line that features our mascot coming from the Zephyr, called Tokyodachi,” he related. The new streetwear and leisure collection has a Japanese anime style that is utilized at many colleges across the country. “It’s new and different,” Wright suggested, “a cute thing that we have for both kids and adults that’s fresh right now.” Along with apparel, the Tokyodachi image is also on many hats and other hard-goods, Wright explained. And speaking of accessories, among Wright’s most popular are socks. “We have many different vendors that supply our socks. People love them because we’ve found that having socks with a lot of pizzazz is very appealing. In the women’s sock category we have some super soft ones that are extremely comfortable. One men’s sock has our former quarterback Marcus Mariota on it, and that’s a big hit for us.” Mariota led the Ducks to a Rose Bowl win and the Heisman trophy. 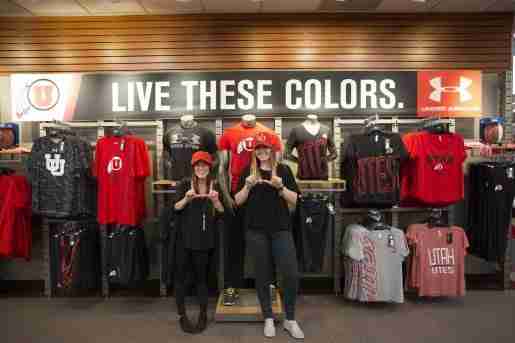 Women posing with merchandise at the University of Utah Campus Store in Salt Lake City, Utah. Higher-priced sweats are among the most popular sellers for the store.

When it comes to scarves, most are not licensed; licensed stocking caps are carried but are not a category that is “blowing out the doors,” Wright noted. Ducks stores operate in 13 different locations; the main campus store is 35,000 square feet.

In Chicago, Ill., at the Chicago Sports Museum Store, Manager Chad Shaw said the interactive museum/playground for sports fans has downsized their stock, with most of the store’s floor space now a game room, and much of their merchandise offered online. In the small remaining sales space, Shaw said the best-sellers are “T-shirts with our museum branding. They use the shape and size outline of the original marquee sign in front of the first restaurant sports broadcaster and Cubs announcer Harry Caray established. All of our clothing and accessory lines feature Harry Caray.”

At the University of Nevada Wolf Shop in Reno, Nev., Gift Buyer Shannon Rhodes described her top-selling licensed apparel items as sweatshirts, T-shirts, long sleeved-tees, and tank tops. She offers these items in men’s, women’s and youth sizes. “We also have sweatpants and shorts, and they’re successful, too.” University of Nevada has just become an Adidas-licensed school this summer, after a long-time affiliation with Nike. “Anything that we can get in that has the school logo or our sports logo we are trying to bring in. We’re excited by the change.” Rhodes said the school is also sticking with Columbia brand clothing, an affiliation they made two years ago. “It’s such quality fabric, and the brand represents a mountain lifestyle. Because of where we are located here in Reno, that’s very appealing.”

According to Rhodes, along with quality brands, another draw for licensed merchandise buyers are the school’s grey and navy colors. “Any time we can bring items in with those colors and jazz them up with our logos, they do very well.”

Every semester, Rhodes changes up colors and graphics so there is always something fresh and new for shoppers in apparel. As to licensed fashion accessories, the winter season makes certain items more popular than others, she noted. “Scarves, beanies, knit headbands, and heavy socks, all with our school or team logos — that’s what people are buying right now to stay warm.” 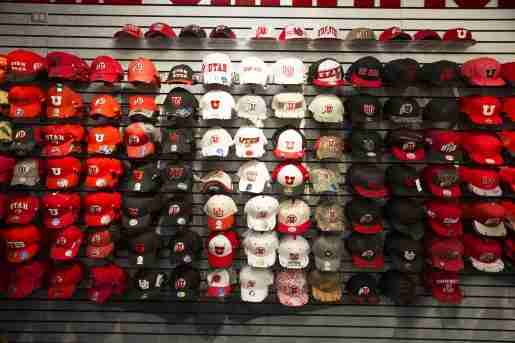 A cap display at the University of Utah Campus store. Socks also sell well for the shop.

In Salt Lake City, Utah, at the University of Utah Campus Store, Store Director Dan Archer said his top sellers feature three different logos. “We have a drum and feather for sports, a block U logo which is academic, and the throwback interlocking U. All of them are popular styles, with the most popular right now sweats in the $60 to $85 range. They’re a little pricey but you can’t go wrong with those quality pieces.”

Also, Archer says the store does well with products that support sports wins. “We were all hoping to get to the Rose Bowl, for example. That could be a million-dollar swing in products, but we are still grateful to go to the Holiday Bowl,” he laughed. “Still the appeal for souvenir gear is less strong than if the team is in the big one.”

Archer’s top-selling accessories are cold weather gear, due to the winter climate in Salt Lake City. “The normal beanie caps, scarves, sweaters, hoodies, and even flannel items like pajamas are all doing well. Anything with our logo that’s warm.” Having once worked with merchandise for the University of Southern California, Archer said “We had a bigger selection of socks there, but we are still doing very well with what socks we have here. Socks are a big favorite as a gift purchase because they are inexpensive. They just resonate with the younger group of buyers.”

The campus store is 27,000 square feet, with the apparel and accessory “red zone” accounting for 9,000 feet of that space.

In Gilbert, Ariz., Brennan Wemer, sales associate at Just Sports, called “T-shirt and blankets” his top-selling apparel and accessories. Speaking for Store Principal Kelly Roberts, he said, “Primarily, Cardinal and Phoenix Rising gear sell the best. The winter season and the fact that blankets make good gifts for anyone makes them popular; T-shirts are just the easiest to purchase, really. We also have NFL Cardinals jerseys that do well, as do jerseys for teams who we play here.” In accessories, hats do far better than socks, and the store does not sell scarves. “Hats are something everyone enjoys wearing, honestly – our flat brims, particularly.” 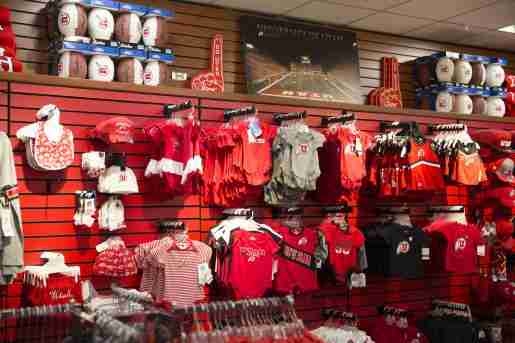 Childrens’ and baby merchandise for sale at the University of Utah Campus store. When the team is winning, merchandise sales are stronger.

And in San Diego, Calif., Jared Bremseth, manager at Sports Fever, explained that his best-sellers include jerseys, particularly Padres team jerseys, socks with the Padre logo, and baseball caps in flat, fitted, and adjustable styles for men, women, and kids. “We carry quality brands which have a lot of appeal for buyers. These include Nike, Adidas, Fanatics, New Era, and Wind Craft – all the major players in the licensing game,” he attested.

In short, fans of schools, school teams, and pro teams all have plenty to choose from at fan shop and college stores with the result that apparel and accessory sales score big.