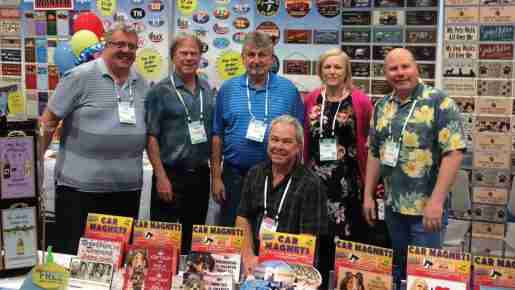 After a slow start, SJT Enterprises reported one of their best-ever ASD shows. The company had several of their reps from across the country in the booth, and there were times during order writing when there were people waiting in the aisle.
“The show started out slowly in our section of the North Hall, but then day two, we were slammed!” reported SJT President Tim Smith. “People love inexpensive wall décor and SJT’s sell really well, and we have by far the largest selection, so that’s why we were so busy. Plus retailers like the fact [that] ours are made in the USA.”

Taking Charge in a New Era

Scott C. Borowsky As you run your business in a new era, keep your eyes and ears open to find...

END_OF_DOCUMENT_TOKEN_TO_BE_REPLACED

Giving Shoppers What They Love

Soap and Candle Sales for the Fun of It Victoria Elizabeth Thomas started The Pink Tub, her...