The success of a piece of clothing at a museum store depends on a variety of factors: the popularity of the associated exhibit, price point, quality of the clothing and creativity that went into the making of the apparel, among other things.
Massachusetts Museum of Contemporary Art (MASS MoCA) is a unique museum in the sense that they don’t have a permanent collection, explained Phyllis Criddle, director of retail operations at MASS MoCA. They have both long and short term exhibitions. All of their apparel is either based on one of these rotating exhibitions or logo-branded explained Criddle. 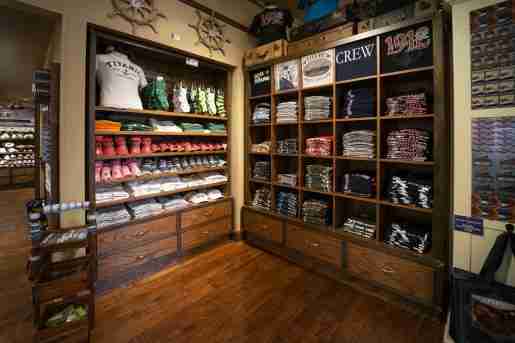 T-shirts sell well at the Titanic Museum, and the attraction’s main T-shirt screener is located in Missouri, not far from the museum’s Branson location.

In general, their apparel is a great category for their shop. Sales will fluctuate with the popularity of an exhibition. “The more well known the artist, the more highly sought after the items in the shop,” commented Criddle.
The size of the store has changed drastically over the past several years, said Criddle. “It grew and then shrunk with COVID and still remains relatively small,” Criddle added. The lobby of the museum is large and shared between retail, café and box office, which allows for this fluctuation in size.
They experienced very robust pre-pandemic sales. After re-opening, they were much slower than they were accustomed to being. But since last summer, they’ve been seeing sales figures rising above pre-pandemic levels. Some months have been their best-to-date, said Criddle. 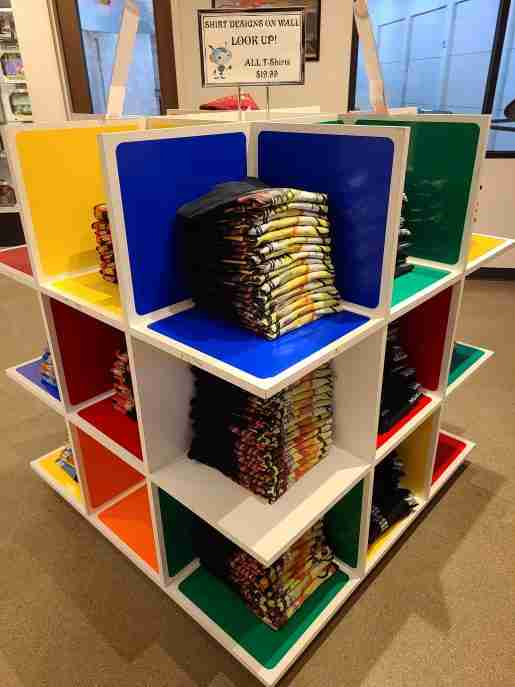 A display of shirts at the National Video Game Museum in Frisco, Texas. The store has eight original T-shirt designs to choose from.

The majority of the apparel they sell are screen-printed T-shirts. They don’t produce many digitally printed products. Criddle said she is normally not satisfied with the end result.
“Screen printing is usually the way we go,” expressed Criddle.
They also offer sweatshirts and embroidered hats. They emphasize ethically-produced and locally created garments. According to Criddle, everything is screenprinted locally in a small business in Scheffield, Mass. In future, Criddle is interested in branching away from those items and into some more unique and unusual garments in the future.
The apparel associated with the most well-known/popular artists that drew visits into the museum in the first place are their best-sellers, said Criddle. “Guests want something in hand to remind them of their visit,” she added. 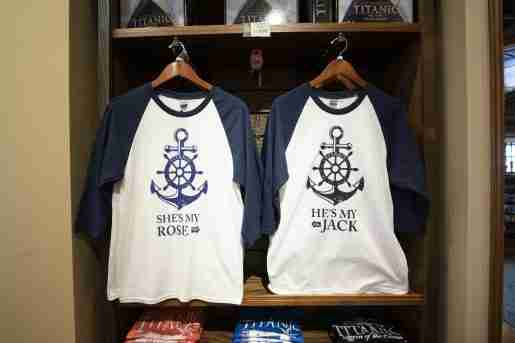 These Jack and Rose shirts are available at the Titanic Museum store.

In terms of apparel type, T-shirts sell the best. This can be explained by the accessible price point, said Criddle. The majority of the T-shirts are $28, but they range in price depending on the age group targeted – children’s T-shirts are less, for example. But items with a higher cost of production – as in long-sleeves or baseball style tees – will be pricier.
At $66 for crew neck sweatshirts and $78 for zip hoodies, sweatshirts are the higher range apparel they stock. They don’t create many sweatshirts based on exhibitions. Instead, most of them are decorated with the museum logo.
At the Titanic Museum Attractions in Branson, Mo., Pigeon Forge, Tenn., and their online store, every piece of casual wear, such as T-shirts, caps and hoodies are custom made. They feature either a real image of the Titanic story, replicas of vintage posters, or custom designed images and wording that capture the essence of the Titanic with a modern look.
Other offerings include period pieces that could have been worn by passengers on the Titanic. They offer an extensive jewelry collection that includes iconic maritime symbols, replica Victorian styled pieces to items commemorating the Jack and Rose love story from James Cameron’s Titanic. Scarves are also for sale – some of which are custom designed with icons of the Titanic story, as well as replica vintage shawls. Gold, blue and white caps embroidered with the word ‘Captain’ have also been inspired by the museum’s exhibition. 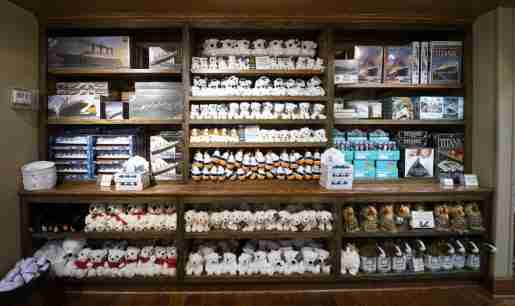 Plush and toys on display at the Titanic Museum. The store is invested in supporting the local economy.

In addition, they also carry a variety of embellished jackets and fleece outerwear apparel, all of which carry the Titanic logo, and which are a must buy for many of their customers.
Lois Warner is the executive buyer for all locations of the Titanic Museum Attractions.
According to Warner, they pride themselves on their mission and motivation: “We want our products to be unique from other museum stores that carry non-custom merchandise,” said Warner
They are invested in supporting their local economy, said Warner. They use local suppliers in both Tennessee and Missouri, including their main T-shirt screener located in Missouri, not far from their Branson location.
This type of merchandise – along with their wide range of offerings –  brings in many shoppers from the local area, along with the tourists. 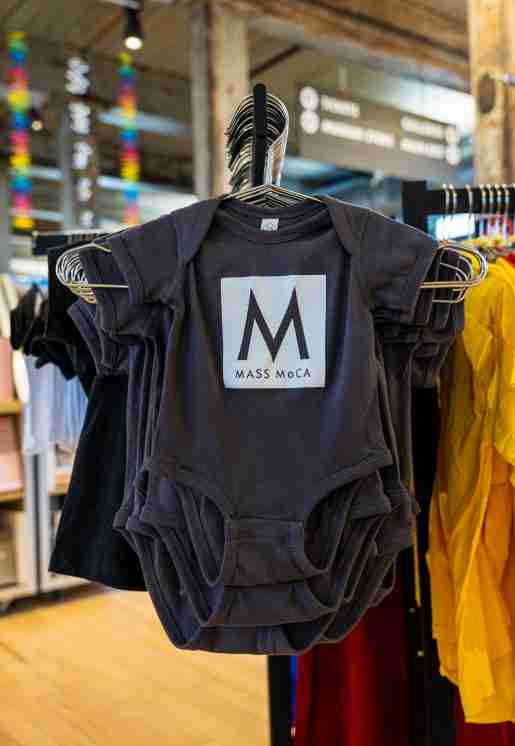 A logo onesie at the MASS MoCA gift shop. The emphasis in on ethically produced and locally created garments at the store.

Their higher-priced apparel includes their jackets in the $40-$60 range and their fashion fleece in the $40 range.
It’s hard to identify only one best-selling item, said Warner, although she commented that their T-shirt sales are very strong. They’ve also seen tremendous gains in their jacket sales, including their branded windbreakers designed with a Maritime type feel. Most of their apparel comes in ladies, unisex, men’s and children’s, so they can accommodate all types of fit. 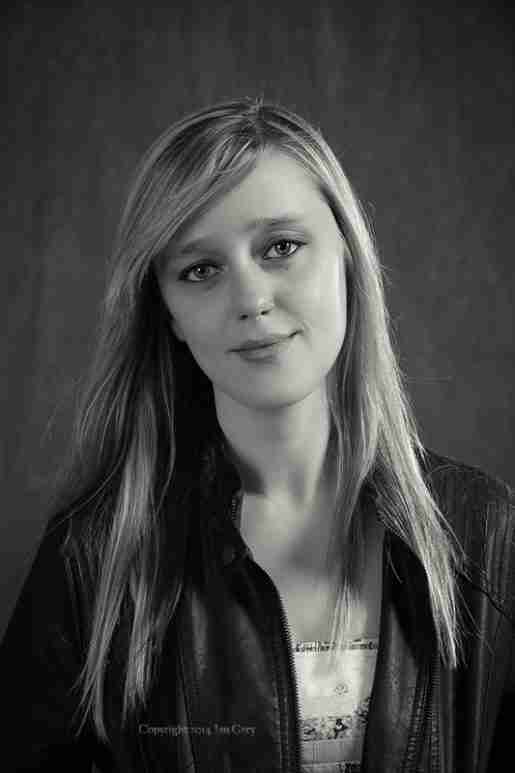 They are a heavy seasonal tourist operation – even though they’re open 364 days a year – so apparel sales fluctuate based on the season, said Warner. For instance, from Memorial to Labor Day, guests will want to buy something they can wear right away based on the weather.
At shows, she gravitates towards high quality craftsmanship and smaller unique companies that care about their product. As a result, numerous guests have remarked that they’ve never seen many of the products before entering the Titanic shops or website. 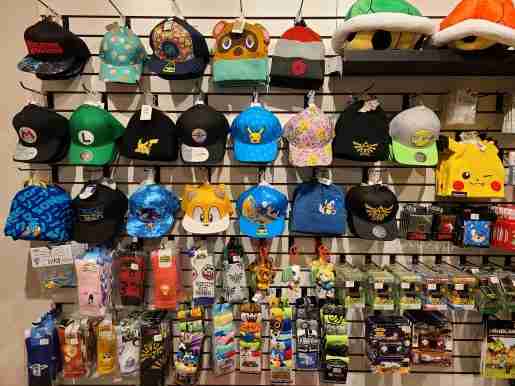 A cap display at the National Video Game Museum. Caps and socks are sourced from local distributors.

At their 800-square-feet gift shop, the National Videogame Museum sells a variety of T-shirts, hats and socks.
The T-shirts are all original designs: At present, they have seven different motifs available.
John Hardie, director, explained that the tees feature video game characters or themes that visitors can connect with. For instance, one shirt depicts a Jurassic Park theme, but features a Yoshi character as a dinosaur.
They source their socks and hats from local distributors. These items feature characters like Sonic and Mario. Using these motifs helps to decrease the expense, while also giving visitors items that connect to the exhibitions. 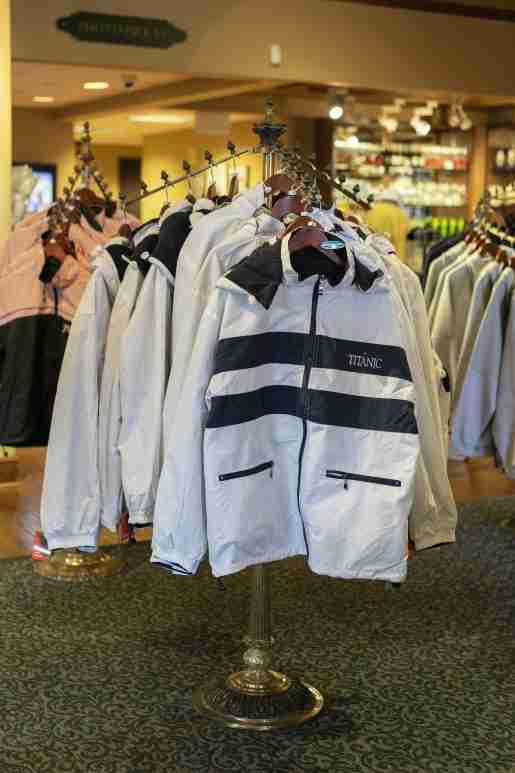 Jackets at the Titanic Museum Attractions store in Branson, Mo. All of the organization’s apparel is custom made.

Their top selling apparel item is their custom tees. They’re constantly running out of these items. Hardie believes these sell because of the cool, fun and nostalgic-feeling designs on them. You also can’t get these custom designs by dropping by a Walmart, expressed Hardie.
Shirts and hats are $19.99. “Most people who buy a T-shirt don’t feel like they’ve overpaid with that price,” said Hardie. 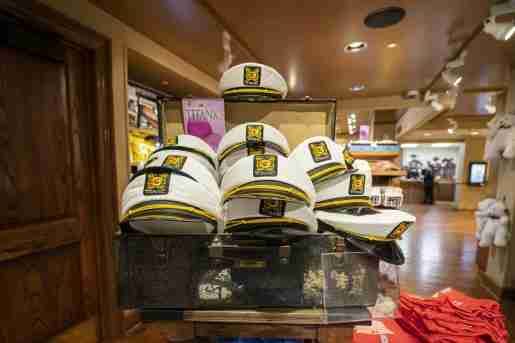 Titanic-themed hats on display at the Titanic Museum. The executive buyer said the store wants its products “to be unique from other museum stores that carry non-custom merchandise.” 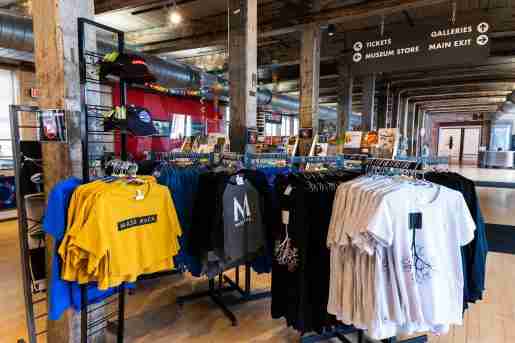 Unique T-shirt designs, and caps, on display at the MASS MoCA store. The store has grown, and during the pandemic, shrunk, and shares space with a box office and café in a large lobby.